It's time to roll up the bandages. The thrill is gone, it seems for me more than B.B. King.

I'm proud of my remarkable 40-year career in the music biz with no hit (commercial) records. As an independent artist without management, major label support or any grants whatsoever (thank you Canada Council and Factor), I toured internationally and accomplished so much. I was unique on stage and on my recordings. I refused to be slick and artificial. I opened for and toured with some of the best musicians in the world, and was regarded highly by my peers. Rolling Stone journalist Lester Bangs once reported, "Nash the Slash is the kind of opening act that makes the headliner work twice as hard".

I created one of the first Canadian independent record labels (Cut-Throat Records) in order to release my music and merchandise to the public. I was the first Canadian musician to use a drum machine on an album (1978), at a time when drum machines were outlawed according to the bylaws of the Toronto Musicians' Association. I was the first to record an album, 'Decomposing', which was listen-able at any speed, and miraculously reviewed in Playboy magazine. I composed and produced music for film and television, and for multi-media exhibitions of the surrealist paintings by my friend Robert Vanderhorst.

I hold the distinction of suing the corporate giant Pepsi Cola of Canada for one million dollars (in the Ontario Supreme Court, 1982) for 'misappropriation of personality'; I won but received no money, just bragging rights.

I travelled across Canada, the US and Europe, and especially adored Newfoundland. I supported Gary Numan and Iggy Pop tours, and was invited to perform in Russia. I received airplay on Polish National Radio in 1979, when Poland was still behind the Iron Curtain. (Years later, a Polish fan explained to me that, because the first LPs were instrumental, there were no lyrics of 'western decadence' or 'punk anarchy' to grade the musical content as unsafe for communist consumption. Too bad no one in Poland could afford to send away for my records.)

Thanks to Bob Stone at World Records for his support and guidance in those early years, and to Vito, Rose (sadly, R.I.P.), Randy and Doug at Records on Wheels for their distribution and encouragement. Thank you to David Marsden and CFNY-FM for being the only Canadian radio to play my music (as well as the records of a multitude of rising independent Toronto bands like Drastic Measures, The Diodes, The Curse, Blue Peter and Teenage Head). My gratitude also to Randy Ellis who hosted me at his New Jersey club, City Gardens, and in his home with my two roadies and beloved dog.

Independent solo artists can't do it alone, and I've been blessed to have had incredible artistic and technical support. Photographer Paul Till shot all my early album and promo photos, John Pearson drew the Nash the Slash font and logo, and James Redekop designed the CD artwork and acted as my indispensable webmaster for the past ten years. They've all been inspirational in their creativity, while putting up with my ornery desire to make the right artistic impression.

I am indebted to Rick Heinl of Heinl's Violins in Toronto, an oasis of beautiful instruments. In a shop surrounded by violins and cellos worth hundreds of thousands of dollars, Heinl's has always treated me with respect and great amusement as they repaired my chain-sawed electric violin alongside a million-dollar Stradivarius.

I fondly remember my dearly departed friend and mentor, David Pritchard. He was a man of extraordinary talent, a brilliant personality, artist, free-form DJ and composer. Last but not least, my good friend Gary Topp deserves special mention. Gary was the promoter who presented my first live performance in 1975 at his Original 99-Cent Roxy movie theatre, and gave me so much exposure at his clubs (The Horseshoe and The Edge) as well as numerous supporting concert slots with such great artists as The Stranglers, Pere Ubu and Magazine. Topper inspired me to create the Nash persona, and to this very day, makes me laugh 'til it hurts.

Finally, I would like to thank all the fans who have supported my career for so many years. I never tired of the letter-writing from and to the young and old, receiving and cherishing (to this day) their thoughts, and drawings of Nash in various poses and demeanor. I have kept many of these letters and artwork because they reflect a serious effort on the part of the fans to communicate with me... to connect.

My 'gauza-lobotomy' t-shirt artwork is courtesy a fan from 30 years ago. There were writers who described at great length how they listen to Nash records while toiling at their creative output, be it poetry, painting or making jewelry. There have been many who wrote about their own musical inspirations, some were gear-heads (drum machines were a popular topic of conversation). There were mandolin and violin players, even classical and jazz musicians. Many wrote for an autographed picture. There were even kids who took their Nash records to school to play for their grade five classmates, and then, I received a fan letter from the teacher. One time, a high school orchestra did an arrangement of 'The Million-Year Picnic'. Eat your heart out, Nickelback!

A few main reasons to put Nash to rest... Live gigs don't excite me any longer. My eccentric style/genre finds no place in the today's scene, although it's widely acknowledged that my sound led the way for the development of contemporary electronic/techo dance music in Canada. Even more to consider, the theft of music on the internet has devastated a very important source of my income. CD sales have dropped off considerably, and it's due mainly to file-sharing without regard for the ownership of the recordings.

Mark Zuckerberg was recently quoted as saying that Facebook will soon go through an 'explosion of sharing'. That may be all well and fine, but CDs are copyrighted objects containing music that is also copyrighted. The music-listening public has this misinformed idea that music is free... listening on the radio is free, so why not the internet? I don't employ Metallica's high-priced lawyers to chase down my millions.

A journalist once asked me to describe a typical Nash the Slash fan. I replied, 'They just get it'. They get my references to Ray Bradbury, Boris Karloff, and even my opening quote from Hitchhiker's Guide to the Galaxy. It was my intention to shock, but not offend.

My early musical inspirations came from classical music especially Beethoven, Tchaikovsky and Prokofiev, the power of The Who, the inter-stellar fables of Hawkwind, the distinctly Kraut-rock riffing of Neu, Michael Rother, Ashra Temple, Amon Duul, and Kraftwerk, the drum-machine innovations of Arthur Brown's Kingdom Come and Silver Apples, the indescribably hypnotic music of Louis Thomas Hardin also known as Moondog, the oblique musical strategies of Brian Eno, and the very first dominant and melodic use of synthesizer on a commercial record anywhere on the planet by Toronto's own Syrinx. Even before the internet, one could scour the world for inspiration and undiscovered gems.

Creativity in all its facets should be inspirational, and as such should be absorbed, its subtleties appreciated, understood and then woven into the fabric of some other person's creative vision. I'm very pleased to have shared my creative endeavors with so many people around the world. I hope I've left a few breadcrumbs in the forest, to inspire others to find their own path.

Listen in safety,
Nash the Slash

Nash the Slash has been creating his unique concept of sound and vision for over twenty years. His first live presentation of music to film was a performance to the surreal silent film Un Chien Andalou at the Roxy Theatre in Toronto.

Nash the Slash was born of silent film. The name comes from a killer butler encountered by Laurel and Hardy in their first film, Do Detectives Think (1927). Nash the musician has gone on to create the music scores for such recent cult films as Roadkill and Highway 61, both directed by Bruce McDonald.

Between experiments with film and music, Nash the Slash became a familiar name to music fans through his association with the pop electronic group FM. Having co-written the hit songs Phasors on Stun and Just Like You, Nash established his credibility as a versatile artist. His talents have been recognized with a U-KNOW (later called CASBY) award for best instrumental artist as well as a Juno nomination for best new male vocalist. Nash's profile was raised on the international stage when he toured the world with the likes of Gary Numan and Iggy Pop. Other high-profile shows include opening for The Who at C.N.E. Stadium in Toronto to a crowd of 70,000 people and opening for The Tubes at a sold-out Maple Leaf Gardens.

Nash has recently recorded new music for the silent film classics The Cabinet of Dr. Caligari (1919), The Lost World (1925), and most recently his highly successful soundtrack to Nosferatu (1922), which he performed at the SKIF Music Festival in St. Petersburg, Russia. Nash continues to do unique film scores for other silent film classics, such as the original Phantom of the Opera.

Nash has released numerous solo albums, the best known being Children of the Night with the hit single Dead Man's Curve. Other albums include Decomposing, the first record playable at any speed (reviewed in Playboy Magazine, 1982); and American Bandages, a collection of all-American classics such as We're an American Band, Who Do You Love, and Psychotic Reaction.

Nash continues to perform live in the Toronto area. For info about Nash's most recent adventures, check out Digger's Diary.

Radio Sampler - Not For Sale

And You Thought You Were Normal

Radio Sampler - Not For Sale

And You Thought You Were Normal

The Reckless Use of Electricity 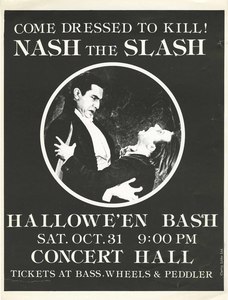 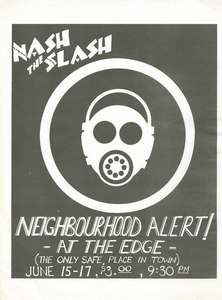 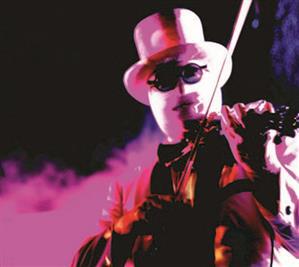