While most rock bands are all too focused on the riff, the Sheepdogs remember the importance of those other elements that make for great rock music: melody, harmony and groove. To see them live is pure rock and roll jubilation, to revel in the splendour created by 3 part vocal harmonies and heavy hitting dual guitar leads. Their latest album, “Learn & Burn”, is a beautiful blend of power and imagination, ranging from ferocious rockers to southern boogie and grooving psychedelia. Big guitars, stacked harmonies, vintage organ and piano skillfully colour each of the album’s 15 tracks, proving that these boys are as dedicated to the craft of songwriting and album making as they are to playing a dynamite live show. The Sheepdogs are an old-school rock and roll revival.

After securing the reputation as the most exciting band to see in their hometown of Saskatoon (and being voted favourite local band by the readers of Planet S magazine), The Sheepdogs have taken their show on the road, touring from coast to coast in Canada and down into the US. They have opened for Matt Mays, the Arkells and Tricky Woo, and have played at POP Montreal, NXNE, Junofest, the Western Canadian Music Awards, and Canadian Music Week. They have independently released three full-length albums, all of which have charted on Earshot’s national monthly top 200 chart, with 2010′s “Learn & Burn” reaching as high as #21. In the summer of 2009, their album “The Sheepdogs’ Big Stand” was nominated for a Western Canadian Music Award for Independent Album of the Year, and the band was nominated for Artist of the Year on XM radio’s The Verge. With no intentions of letting up, 2011 sees The Sheepdogs touring across North America spreading the good word while continuing to write and record in their home studio. 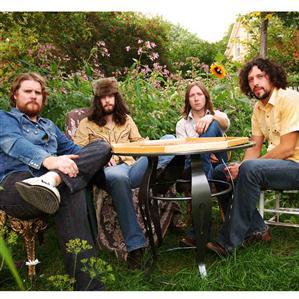