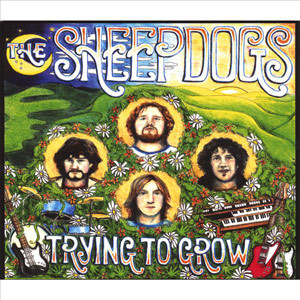 When Trying to Grow arrived my first thought was wow, the CD cover looks like something the Guess Who would have used about 30 years ago. Now that's not a bad thing since many things retro are very 'in' these days, witness That 70's Show from television. The better news in terms of The Sheepdogs though is that their music is somewhat reminiscent of The Guess Who too. No, Ewan Currie lead vocalist here doesn't have quite the same voice as Burton Cummings, no one can quite match one of the most recognizable voices in Canadian music. But, musically, the connection is there. There are rifts, licks and passages that someone from the era of The Guess Who will pick up on starting with the lead cut Warmer Love.

Certain songs, such as It's Alright, could easily have found an audience in an earlier era. The band doesn't list The Guess Who as an influence, but Led Zeppelin, Credence Clearwater Revival, and the Rolling Stones are, so they obviously are aware of the earlier effort.
This is a very solid album, no doubt in-part because it has a nostalgic feel, at least to my ears.

There really isn't a bad cut here. As the band's first full-length recording they have done an excellent job of putting together this 11-song effort. Musically, it's straight rock, but the kind where vocals still play a lead role, you can hear them clearly, and not at a scream just below the decibels put out by a small jet.

The Sheepdogs do a nice job of shifting gears from slower tunes such as Natural Wonder to ones which have more volume, and more beat, such as Save Yourself.

This band is really achieving something of a cross-over sound here. It will be liked by younger listeners, but for those of us who were teens more years ago than we might like to imagine, the sound is familiar enough to draw us in too.

This Saskatoon-based band has certainly hit the right notes for this reviewer.
-Calvin Daniels

buy the CD from the band here: http://www.thesheepdogs.com/?page_id=8