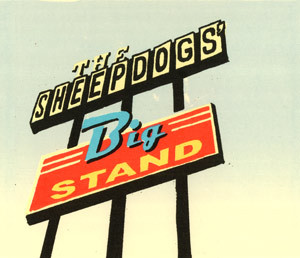 The Sheepdogs’ The Sheepdogs’ Big Stand sounds exactly how you’d expect an album made by a group of prairie boys would sound: the sound is clearly southern rock, but with blue grass and soul elements. If you think that’s not for you, hear me out: through the fusion of these tried and tested genres, The Sheepdogs have created something that sounds extremely contemporary. Also, it manages to showcase the boys’ musical chops while remaining highly listenable, which is no easy feat.

The album starts on an upbeat note with “Let it All Show”, which sets the tone for the rest of the album. It has a distinct southern rock sound, and great narrative lyrics. It also establishes a sense of fun and energy that doesn’t fail throughout the album.

I particularly liked the vocals on this album. Why? Because they’re simply fantastic. Lead singer Ewan Currie’s voice has an appealing mix of power and heart, especially on the chorus of “Yes It Is.” But even though the vocals are interesting enough to carry a lot of the songs, The Sheepdogs never get lazy with the instrumentals, which sometimes include the saxophone and fiddle (though not at once). You never feel as though one is taking the back seat to the other on album, in spite of relatively lengthy guitar solos on tracks like “Waiting for the Morning to Come”. Each has their moments to shine.

Although most of the songs are upbeat, it’s the slower songs that really got me. It’s on these tracks that the expressiveness of Currie’s voice is really highlighted.

Another one of the album’s standout qualities is its lyrical themes. Anyone who has finished middle-school should be able to relate to at least some of the different songs on this album, with themes that range from being strung along, to being in love, to following your dreams. The songs also include lines like “Sunday morning, it’s afternoon/and the coming week really drops my mood”. If you can’t relate to that, you can’t relate to much.

“The Creeps”, an intriguing song about the kind of creep you’ll meet in a bar who “thinks he’s better than you/and he tells all the ladies this too” but is secretly “a lonely man too.” I guess I never really thought of it that way?

So if you’re looking for an album that’s a departure from your more typical indie rock album, or you’re just into guitar solos and bluegrass, you’ll want to give Big Stand a listen. Admittedly, it took a while for this album to grow on me but, eventually, grow on me it did, kinda like that persistent boy in high school that you eventually end up dating. Hopefully it’ll have a similar effect on you.

Top Tracks: “Black and Tan”, “In My Sights”, “Push it Along”
-Allyssia