“Finny McConnell is one of the very few true singers/songwriters left in Paddy Rock & Punk, and The Black Irish will be hard to beat as the #1 album of the year in Celt Rock & Punk! Pick up your copy people!” — John Bowles, Paddy Punk Radio

“The Mahones are not only the best Canadian party/dancing/drinking band you'll ever hear, but they've also written some gorgeous ballads. They are dichotomous: both poignantly folk and electrifyingly supersonic.” — Christine Bode, journalist.

THE MAHONES — Irish punk at its finest since 1990!

Twenty–three years ago, Irish music met punk rock, and the world was forever changed! Irish Punk pioneers THE MAHONES formed at the end of the bar at a legendary Irish Pub in Kingston (Ontario, Canada), over hundreds of shots of Jamesons Irish Whiskey and pints of Guinness Irish Stout to chase (naturally). It was the brilliant idea of Dublin-born Finny McConnell to put together a band that sounded like The Clash, The Pogues, The Who, Husker Du, The Dubliners and The Replacements, with a dash of Social Distortion, and a name that rhymed with The Ramones. Once this Irish rock and roll stew was complete, and with the band motto "Give it all you've got, or forget about it" (Joe Strummer), a one off gig was booked on March 17th - St. Patrick's Day. Go figure. The world has never been the same!

The Mahones have released ten CDs to date (Draggin' The Days, Rise Again, The Hellfire Club Sessions, Here Comes Lucky, Paint The Town Red — The Best Of, Live At The Horseshoe, Take No Prisoners, The Irish Punk Collection, Whiskey Devils — A Tribute To The Mahones and The Black Irish Album), and one very rare cassette (Clear The Way). The Black Irish Album, The Mahones' critically–acclaimed 7th studio album, was released along with a tribute album in 2011, featuring 20 international bands covering Mahones' classics!

Many of the band's talented friends have made guest appearances on these recordings including Scruffy Wallace (Dropkick Murphys), Rick Barton (Dropkick Murphys, Continental), Ian Blurton (C'Mon/Change Of Heart), Mary Margaret O'Hara, Johnny Fay and Gord Sinclair (Tragically Hip), Ian D'Sa (Billy Talent), Colin Cripps (Crash Vegas, Jim Cuddy Band), Ian Thornley (Big Wreck, Thornley), Kevin Hearn (Lou Reed, Barenaked Ladies) and Kevin Quain (The Mad Bastards). As for touring, The Mahones have been on too many tours to count and have performed in over 25 countries around the world. Europe, North America, Scandinavia, Ireland, UK, and Australia have been the usual stomping grounds for these Irish Punk Legends.

The Mahones have shared stages and toured around the world with legends such as The Dropkick Murphys, Stiff Little Fingers, Shane MacGowan and The Popes, Billy Bragg, Chuck Ragan, The UK Subs, Sick Of It All, The Defects, Agnostic Front, The Buzzcocks, D.O.A., Against Me, The Tragically Hip, The Damned, Suicidal Tendencies, The Prodigy, Gwar, Skunk Anansie, Tricky, Blue Rodeo, Steve Earle, The Alarm, Sinead O'Connor, The Street Dogs, Roger Miret and The Disasters, Flogging Molly, Spirit Of The West, The Dubliners, Christy Moore, The Band and even Van Morrison, to name a few. More recently, Terry Woods and Phil Chevron of The Pogues joined The Mahones on stage for a tour of Central and East Coast Canada and long time Mahones fan and friend Scuffy Wallace of The Dropkick Murphys joined The Mahones onstage for a few shows as Tin Whistle player in Toronto and Montreal during a recent DKM Canadian tour.

Over the years, The Mahones' music has appeared in several major international Hollywood film releases. Recently, The Mahones were very excited to have their song "Paint The Town Red 2010" featured in the climactic final fight scene of the 2 x Academy Award/ 2 x Golden Globe winning Mark Wahlberg/Christian Bale/Amy Adams film "The Fighter" (2010). The Mahones also co-wrote and recorded the title track for the Hollywood Pictures movie "Celtic Pride" (Wally High/The Mahones) featuring Damon Wayans, Daniel Stern, and Dan Akroyd which was composed specifically for the film. The song "100 Bucks" was also featured in the movie "Dog Park", featuring Natasha Henstridge, Luke Wilson, Janeane Garofalo, as well as Bruce McCulloch and Mark McKinney from Kids in the Hall. Our latest film news is The Mahones song "A Little Bit of Love" is in the new film "Ecstasy", based on Irvine Welsh's (Trainspotting) critically acclaimed book.

The Mahones had the honour of performing The Pogues Christmas classic "Fairytale of New York" on CBC's The Hour's 2007 Christmas special, viewed by over 1 million people. The Mahones also made a special St. Patrick's day appearance to sing the Canadian and American national anthems at the Air Canada Centre for the Toronto Raptors, and then there was the time that they blah blah blah...

The Mahones have headlined and made main stage headline appearances at many major festivals internationally...a few (dozen) are listed below...

Now with two new CDs "The Black Irish Album" and "Whiskey Devils — A Tribute To The Mahones" released in 2011 and over 100 shows performed in over 25 countries...THE MAHONES are now on a world tour in 2012. See you soon!

Hide your drinks, and lock up your daughters...

THE MAHONES ARE BACK!

Live at the Horseshoe 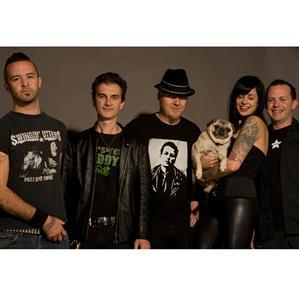