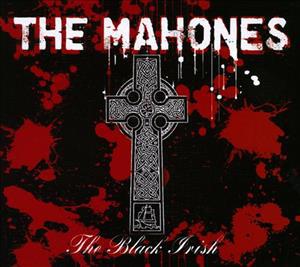 Finally the long awaited Mahones 6th studio album is out. Yes, the wait has been too long. The previous album, “Take No Prisoners”, was released in 2006 and in the meanwhile Finny and his band only released a best-of (“Irish Punk Collection”, 2008) and a split with Catgut Mary in which no new material was included.

"The Black Irish" album was released in Europe at the beginning of January and in the USA and Canada some weeks ago. Therefore, a lot of reviews are already available on the Internet and I was wondering if I could be able to say something new and/or different. OK, I’ll do my best.

The Mahones “The Black Irish” is a strong album. The band is really tight and if you’re listening to it you will not be able to stop dancing and sing along till track no. 6, the wonderful “Girl with Galway Eyes”. Even if I always prefer their original songs than their traditional covers, I must say that this time the selection is quite good: “The Wild Rover” and “The Shamrock Shore”.

Other highlights of the album are, IMHO, “The Blood is on Your Hands” and “Give It All You Got (Or Forget About It)”, a top-notch song in which The Clash and The Rolling Stones influences can be heard.

Apart from that, a great bunch of “classic” Mahones style songs: “A Great Night on The Lash” (a tale about drinking with Shane MacGowan), “Ghost of a Whiskey Devil” and “A Pain from Yesterday”, and a song that could have been included in their “Hellfire Club Sessions” album, “Whiskey Under the Bridge” ( a Waterboys sounding song)

The top quality packaging, a digipack, shows all the credits and the pictures of all the current Mahones. Unfortunately, this time they have decided not to include a booklet with the lyrics.

After their masterpiece, “Here Comes Lucky”, The Mahones released “Take No Prisoners”. An album with a lot of guests and a great sound that, however, was a little bit disappointing (at least for me) because of the lack of good songs. Fortunately, Finny’s songwriting is at his best on “The Black Irish” album and guests such as Rick Barton (ex-DKM) and Ian Blurton are a good addition to the sound.

Remember that The Mahones will be touring Europe together with The Street Dogs from April 21st to May 22nd. Long life The Mahones!
-Kinksmarkham