Mother of Pearl - She Bop! A Century of Jazz Compositions by Canadian Women 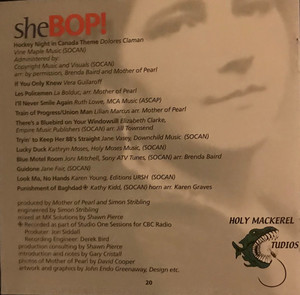 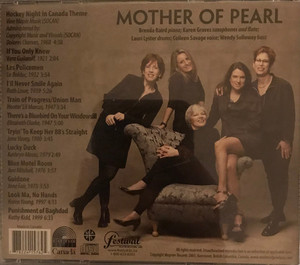 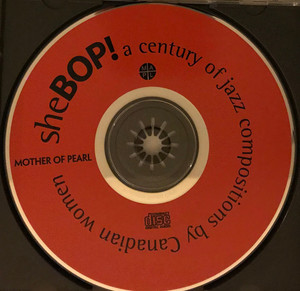 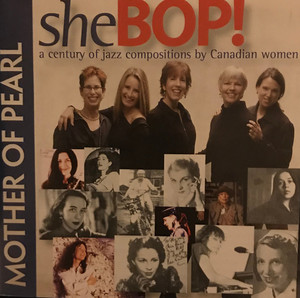 She Bop! A Century of Jazz Compositions by Canadian Women

“The response from those who attended was tremendous . . .great band and a great presentation.”
-Brent Campbell, Brandon Jazz Festival

(Wonderful) a warm and spirited CD . . . The ballads are sung with stylish charm and warmth, and the up-tempo numbers bounce along in mainly bopish arrangements.
-Montreal Gazette

“A labour of love covering most of jazz’s bases, from swing, Latin and bebop through fusion and blues”
-Kitchener-Waterloo Record

“these players are really paying service to the composers and tunes in their original historical light, not for their subsequent pop-culture associations”
-The Edmonton Journal

Hockey Night In Canada Theme, Dolores Claman, 1968
Dolores Claman is a Vancouver-born composer who received her graduate training at the world-famous Julliard School in New York City. Among her Vancouver accomplishments was the score for Theatre Under The Stars’ first ever original musical—Timber! She was one of the first women to break into the field of “industrial” composing, building a career as a successful writer of scores for advertising, television, film, and theatre. In 1967 she wrote A Place to Stand (Ontari-ari-ario) for the Oscar-winning film of the same name, commissioned by the Ontario government. The next year, Dolores wrote the theme for Hockey Night In Canada, a tune that has become both a genre classic and an in delible part of the Canadian sonic landscape. More than thirty years after its debut, Hockey Night In Canada remains one of the best-selling tunes in print, recently beating out both ‘N Sync and the Back Street Boys in the catalogue of Canada’s leading distributor of sheet music. Her daughter, Madeleine Morris, is a well regarded Vancouver singer-songwriter.

If You Only Knew, Vera Guilaroff, 1921
Born in London, England in 1902, Vera Guilaroff moved to Montréal when she was a young girl. She studied piano with her sister Olga, who became a renowned teacher, and at the age of 14 began her own career accompanying silent films at the Regent Theatre. Vera studied music at the McGill Conservatory, and collaborated with Willie Eckstein, the Montréal born rag time piano star. Best known as an interpreter, Vera also com posed a number of instrumentals and songs both on her own and with Eckstein. Married to drummer Harry Raginsky, she toured widely, performing on the BBC in England during the Second World War and across the US. She recorded three 78’s for the Apex label, including the Maple Leaf Rag. She returned to Montreal and lived there until her death in 1976.

Les Policemen, La Bolduc, 1932
Mary-Rose-Anne Travers remains one of the best-loved Quebec popular chanson artists of the twentieth century. Singer, song-writer, violin and harmonica virtuoso, she was born in Newport in the Gaspé in 1894. At 13 she moved to Montréal, paying for her fare by playing the violin on the main street of Newport. Working as a domestic in Montréal, she met plumber Edouard Bolduc, and in 1917 they married. Poverty forced her to perform music again, first as a violinist, and then as a singer. Her first recordings of her own songs were hits, selling 12,000 copies within the first months of their release. Her songs were reflections of real life, and as such won her a wide and passionate following among ordinary people. Her career lasted little more than a decade. In 1941 she died tragically young, at 46. She is seen as the founder of the chansonnier movement that transformed music in Québec, paving the way for artists like Felix Leclerc and Gilles Vigneault. A number of books about her life and music, and reissues of her songs have been produced. Les Policemen is a tongue-in-cheek ditty about the various attributes of men in uniform.

I’ll Never Smile Again, Ruth Lowe, 1939
Born in Toronto in 1915, Ruth Lowe was working in a music store when Ina Ray Hutton brought her all-girl band, The Melodears, to town. Ina Ray’s piano player became ill and she frantically searched for a replacement. Ruth auditioned, got the gig, and joined the band. She was 21 years old. Two years later she married Chicago music publicist Harold Cohen. A year later Harold died during an operation. Widowed at 23, Ruth poured her grief into a tune she named I’ll Never Smile Again. The song premiered on CBC Radio’s Music By Faith, featuring Percy Faith. A year later Ruth passed the song to a member of the Tommy Dorsey Band. Dorsey thought the tune was a good one and had it arranged for his young singer, Frank Sinatra. It became Sinatra’s first big hit and launched his career. During World War II, the song became symbolic of the pain and loss felt by those whose friends and family members were killed in the war. Later Ruth would compose another tune for Sinatra, his closing signature song, Put Your Dreams Away—which was played at Sinatra’s funeral. Ruth Lowe re married and lived until 1981. In 1982 she was given an honorary Grammy and inducted into the American Music Hall of Fame.

Train of Progress/Union Man, Hootin’ Lil Marcus, 1947
Very little is known about Lillian Marcus. Her name first appears in the November 1947 issue of People’s Songs, the bulletin of an American left-wing music organization. The center spread of the bulletin featured two songs by Marcus and a brief description of her as the “energetic, dynamic director of People’s Songs of Canada”. There is a picture of a young woman playing the accordion. According to the short accompanying notes, Lillian Marcus attended the first Hootenanny organized in Toronto in 1946. After hearing artists including Pete Seeger and Lee Hays of The Weavers, she was inspired to start a Toronto branch of People’s Songs and begin writing her own compositions. She soon acquired the name Hootin’ Lil. People’s Songs brought together politically committed musicians with the goal of creating a left-wing alternative to the dominant pop u lar culture. Using folk music, jazz and Broadway musical styles, People’s Songs laid the foundations of the folk revival of the fifties and sixties. Marcus’ songs, Train of Progress and My Union Man are the earliest published Canadian songs in this genre. No more songs have been found, and aside from greetings sent in 1948 to People’s Songs and in 1953 to Sing Out!, its successor publication, no more was heard of Hootin’ Lil.

(There’s a) Bluebird On Your Windowsill, Elizabeth Clarke, 1947
Elizabeth Clarke was not a songwriter and had no intention of making music history when she went to work at Vancouver Children’s Hospital one day in 1947. During her shift, a sparrow happened to land on the windowsill and a young boy became very excited by this occurrence. Clarke, a nurse, was also a creative soul who liked to read stories and poems to her young charges. She transformed the sparrow into a blue bird and the tale of its arrival into a song. There’s a Blue bird on Your Windowsill found its way to Al Reusch, one of Vancouver and Canada’s recording pioneers. I'm pressed by the optimism and emotion of the song, Reusch gave it to local artist, Don Murphy to record. Shortly after, the popular Vancouver group The Rhythm Pals, cut a version that became a regional hit. The song found its way to Doris Day and then to Bing Crosby and dozens of others. It became the first Canadian-written song to sell a million copies. True to the ethos of the song, Clarke gave every penny of her royalties to the hospital.