Mother of Pearl is Vancouver's all female jazz and blues quartet. Each of its members is an accomplished artist in her own right, pursuing diverse musical careers including music therapy, operatic percussion, piano teaching and being a studio musician. Between them they have decades of performing experience in an encyclopedic array of ensembles and genres. In 1996 a Vancouver women's arts festival brought them together to play what was intended to be a one-time concert of jazz performed by women. Like many one night stands, it was so much fun that almost a decade later they are still at it. Today pianist Brenda Baird; bassist Wendy Solloway; drummer Lauri Lyster and saxophonist/flutist and vocalist, Karen Graves are an integral and active part of Vancouver's burgeoning jazz milieu.

Mother of Pearl has learned the secret of jazz survival - dont just do one thing! They'll play a concert, a club or a wedding. They've visited hundreds of classrooms from Haida Gwai to Castlegar, earning them schools of fans. Jazz festivals from Halifax to Whitehorse have welcomed them with open ears. Radio audiences from The Vinyl Café to Hot Air to Sounds Like Canada have heard them perform and discuss their music. Even flyers on Air Canada have heard them on the in-flight entertainment. With two CDs to their credit, they are slowly but inexorably building a national following for their work.

Mother of Pearl casts a wide net for their repertoire. There are standards from the golden age of jazz and blues, tunes and songs they have composed and funky gems drawn from the contemporary jazz revival. Through it all runs a commitment to playing great music and also to playing music written and performed by women. From the International Sweethearts of Rhythm, circa 1945, to the work of Carla Bley, circa now, Mother of Pearl has always paid tribute to their foremothers. In 2000, they began the research that would lead to sheBOP! A Century of Jazz Compositions by Canadian Women.

sheBOP! is a cohesive presentation combining music, slides and narrative to tell the story of jazz written by Canadian women from the Ragtime of Montreal's Vera Guilaroff to the world jazz of Vancouver's Kathy Kidd. It poses and answers the riddle, Who wrote Frank Sinatra's first big hit? Who wrote the first Canadian song to sell a million copies? Who wrote Canada's unofficial national anthem, Hockey Night in Canada? Canadian jazz women, that's who! Covering a dozen genres of jazz, sheBOP! is a revelation and has introduced Canadian women's jazz history to audiences from Quadra Island to Toronto.

As they approach their tenth anniversary Mother of Pearl can look back at many accomplishments and look forward to new creative challenges. We continue to develop the concept which originally inspired us to form the ensemble to build the visibility of women as creators and performers of jazz.

Multi instrumentalist Brenda Baird has been known to wear many hats in any given week. You might find her strumming a guitar and singing on the back of a wagon at the Pumpkin Patch, hurrying home to inspire and cultivate private students (or her garden!), glued to her computer whilst transcribing other people’s music or composing/arranging her own, or answering phones as a volunteer at the Vancouver Crisis Centre. Holding a Bachelor of Music degree (UBC), Brenda’ s musical endeavors have taken her in almost every musical direction: from theatre, film and television work, to chamber music ensembles, concert reviewing, and 14 years with the well-known all women Vancouver jazz quartet, Mother of Pearl. She’s a member of the swingin’ Hoppin’ Mad Orchestra, and the soul jazz group, Woolysock. Brenda’s toured with a variety of ensembles in Africa, France, Japan and throughout North America.

She Bop! A Century of Jazz Compositions by Canadian Women 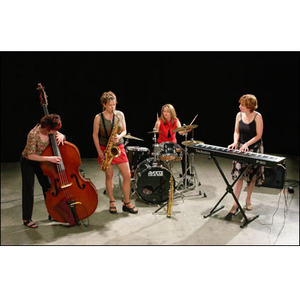