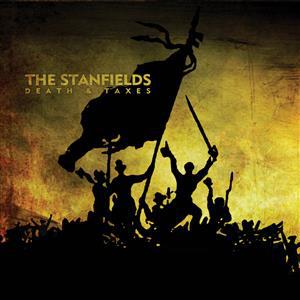 In this world nothing can be said to be certain, except death and taxes. -Benjamin Franklin, 1789

It’s a grim quotation, no doubt, but it speaks volumes, and it’s from this quote that Halifax outfit The Stanfields draw the name of their second album.

The Stanfields were a band I was aware of for years, but were one of the many acts on my “I-should-listen-to-you-but-haven’t-yet” list. When I started listening to Death & Taxes, I had a similar reaction to the way I’ve reacted to other bands on that list: a resounding “Why haven’t I listened to these guys before?”

On this album, The Stanfields rock. Hard. And they tell some killer stories along the way. Their raw power comes in part from singer Jon Landry, who’s got a hell of a growly voice that forces you to pay attention. Of course, the rest of the band is very noteworthy as well- Craig Eugene Harris’ mandolin on songs is beautiful and really gives some of the songs here a distinct east-coast flavour.

What makes the songs memorable is how each seems to have a very distinct message- “Invisible Hand,” for example, is an anti-corporate song whose title references one of economist Adam Smith’s key ideas about capitalism- that an “invisible hand” will guide the economy. “The Boston States” is a tragic song about a man falling in love with a woman, the woman being shipped off to Boston, and the man joining the king’s army to go to Boston.

I personally loved this album the most when it was rocking out at its hardest. Opener “Jack of All Trades” provides a good bit of momentum to start the album off with its driving, punk-esque guitar riff. And the title track hits so hard and so quickly you won’t even realize how hard you’ve just rocked out.

The band does a pretty kickass cover of the Irish folk song “Mrs. McGrath” (which also happens to be very anti-war), complete with the wonderful chorus that one can only sing by looking at the lyrics.

The rest of the album’s songs are filled with great tales of murder and melancholy, and it’s no wonder that this band won the gold medal from The Coast in the category of “Best band to get trashed to.” Perhaps in several years a song by The Stanfields will be the equivalent of Spirit of the West’s “Home For a Rest.”
-Michael Thomas