Everyone has a story to tell about The Stanfields – if you don’t, give it time.

Inciting mosh pits and still making Mom proud, The Stanfields attract fans of all classes and creeds that vocalist Jon Landry affectionately describes as “people who work hard and play hard, and are the most generous, down to earth and supportive people that one could ever hope to meet.”

There are no glamorous motives – just five working class Canadians with an honest desire to entertain. “I think being a ‘working class musician’ is a great thing to aspire to,” Jon muses. “To us, ‘rock-star’ is a dirty word that caters more to your ego than your quality of life.”

It started in 2008 when The Stanfields took the East coast entirely by storm with their rhythm-fueled hard rock laced with traditional roots sounds. Coming onto the scene with a single entitled “The Dirtiest Drunk (in the History of Liquor)” and a live show best described as intense celebration, it’s easy for those who’ve yet to dig deeper to coin The Stanfields as a one-dimensional kitchen party band with a drink in their hands.

“We want people to leave our shows with a smile on their face and a ringing in their ears. One might argue that this is in direct opposition to our lyrical content, but I feel they are two sides of the same coin. It’s okay to celebrate life even though there are many things you would like to see changed,” says Jon.

“We just love to see a crowd going nuts,” Jason Wright adds. “We put a lot of thought and feeling into our records. It’s when we get to concentrate on our art. Once that’s done and we’re on stage, it’s time to switch gears and focus on the show. The art is finished and now it’s party time.”

With the help of iconic producer Mike Fraser (AC/DC, Metallica, Aerosmith) The Stanfields better capture the intensity of their riotous live show on Death & Taxes with harder, faster and full-on thunderous waves of rhythm and roaring harmonies behind menacing leads.

“We’ve grown to be louder, faster versions of ourselves. Many thousands of road and air miles, and all the trappings therein, tend to have that kind of effect on a band like ours,” Jon explains. “Where Vanguard is all over the place stylistically, Death & Taxes is more focused on our rock and roll influences.”

“Run on the Banks” comes across as a continuation of Vanguard’s “Ghost of the Eastern Seaboard” by offering a deeper look into the effects organized crime can have on unsuspecting families, and “Blacktop Blues” reflects the frustrations of men fated to hard labour from a first person point of view. “Invisible Hands” and “Jack of All Trades” call out the greed sitting at the foundation of modern society.

“I’m not sure that the struggles traditionally defined as ‘Atlantic Canadian’ are any different than those of the rest of our world. Everyone feels the pain of a contracting economy, self-serving leadership and social injustice, so I don’t think our musical viewpoint is either unique or moulded by our region of origin,” Jon says. “We are one of many in a chorus of voices from far and wide who are fed up with a system of governance which provides a platform that encourages destructive behaviour. Let me be clear: in my personal view, this isn’t a drastic change of ideology for our band. Death & Taxes is hammering on the same points as Vanguard, but this time we are being more frank about it.”

But they’re not going to do it alone. “As cliché as it sounds, we’re nothing without our fans,” Craig adds.

And that’s where The Stanfields’ culture meets their simple desire to entertain – the stuff stories are made of. 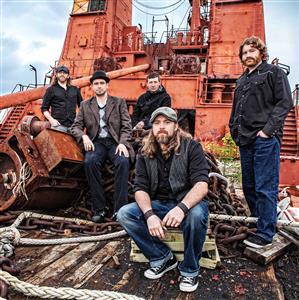