Stanfields - Vanguard of the Young & Restless 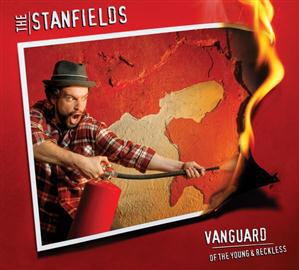 "Meet The Stanfields, a maelstrom of rock ‘n’ roll, Celtic and bluegrass. Hailing from the gritty post-industrial towns of Nova Scotia, The Stanfields play every show like it’s their collective last night on earth. Their kitchen party harmonies, thunderous rhythm section, high-octane stage show and genuine chemistry have won over audiences clear across the nation.

Since forming in the summer of 2008, The Stanfields wasted no time making their mark on the venerable Atlantic Canadian music scene. Hailed as “The Clash meets Steve Earle” by Great Big Sea’s Sean McCann and “The Bastard Children of ACDC and Stan Rogers” by Halifax’s Q104 FM, further accolades began rolling in, including a double win for “Best New Artist” and “New Artist/Group Recording” at the 2009 Nova Scotia Music Awards. In March 2010 The Stanfields were voted Halifax’s “Best Band”, “Band Most Likely to Make it Big” and, for the second consecutive year, “Best Band to get Trashed to” by readers of The Coast magazine. 135 sweat soaked shows and multiple cross country trips later, including a shared bill with Sloan at the Vancouver Olympics, The Stanfields returned to the recording studio under the guidance of gifted producer/engineer Darren Van Niekerk (Matt Mays, K-OS) to shore up their debut effort, entitled Vanguard of the Young and Reckless (Groundswell/Warner).

A thematic departure from traditional Canadian East Coast fare, where good times and family values are emphasized and celebrated, Vanguard explores the darker, unspoken side of Maritime living and how it relates to an increasingly globalized world. The sinister, feedback-laced, opening track “Dagger Woods” is a dementia-fueled whirlwind in the Crazy Horse style, with the barely contained rage and furious delivery of vocalist/guitarist Jon Landry in the fore. The lead single “The Dirtiest Drunk (in the History of Liquor)” portrays substance-driven lunacy beneath the thin veneer of a traditional rock ‘n’ roll party tune, collectively propelled by bassist Craig Eugene Harris and drummer Mark Murphy’s relentless barrage of heart stopping rhythms. Perhaps the most identifiable Stanfields number to date is “Ship to Shore”, a dark, energetic romp highlighted by the duel cascading leads of guitarist Jason MacIsaac and Jason Wright on bouzouki.

“Ship to Shore is an ode to the men and women who put themselves in harm’s way, not for an idealistic agenda or political will, but to preserve a social hierarchy that is increasingly letting them down at every turn, at home and abroad,” says Jon Landry. He elaborates further, “ I feel that in many ways, we are both benefactors and victims of the information age, being constantly bombarded with reports of bloodlust and a crumbling economy, all the while being spurred on by a marketer’s interpretation of what ‘the good life’ is, the things we have to own to make it so, and the hoops we have to jump through to get there. I find this duality confusing and rather stressful. I think a lot of people do. I know this is not a new or original observation by any means, but I think it is an important one that has to be re-addressed time and time again culturally, particularly in popular music.”

“Of course, I recognize that we might come off as a bunch of doomsayers to the uninitiated, but really, we are all pretty positive guys”, he continues. “Let me be clear in this. Our ‘art’, so to speak, is left at the tavern door. Seeing people having the time of their lives at a rock show trumps any perceived barstool prophet credo we’re spouting. We show up at the venues every night to entertain, to make people party their asses off and to forget their troubles, at least for a few hours. That is the commitment we have made to our audience, and believe me, there have been many, many mornings after where we are hoarse, sore and bleeding from the process.”

Having recently signed a management and label deal with the aptly titled Halifax label GroundSwell Music and with the support of Warner Music Canada and booking agent Paul Gourlie of The Agency Group, the Stanfields are well positioned to make an impact and resonate with a wide cross section of music lovers with their release. Vanguard of the Young and Reckless promises to lyrically deliver a layman’s perspective to the thought process while musically catering to primal rock ‘n’ roll instinct, inviting you to think, drink, dance or fight back."