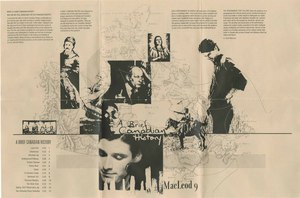 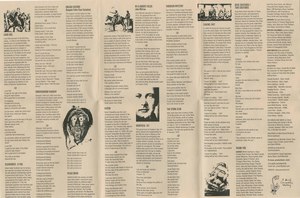 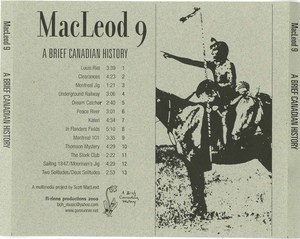 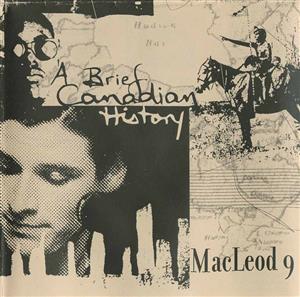 The CD shown (ABCH No.1) was a limited run, only issued a few for promotional purposes. Eventually, 500 units of the second run (with the Two Natives on horse back) were pressed (all sold out). The second insert guide was quite extensive and well designed. Now only sold on iTunes.

WHAT IS A BRIEF CANADIAN HISTORY?

A Brief Canadian History is a multi-media music or theatre performance. It is an education package designed to celebrate and promote a deeper awareness of Canada, and Canada's First Nation’s art, culture and history.

A Brief Canadian History’s purpose is to ask the question, "Why are we still searching for our Canadian identity?" to audiences across the country, while encouraging them to arrive at their own answers to this question.

A Brief Canadian History brings a fresh focus and interpretation to historical figures and events that have shaped both our Native and Canadian history. The title was chosen to represent the period, which began when Europeans occupied and commenced their exploitation of Canada. This is indeed a brief period of time, when viewed from the context of native history, which dates back some 10,000 years. This engaging performance takes its audience on a geographical and cultural voyage across Canada, touching on events that have boldly or subtly helped to define our nation.

Our performances highlights legendary Canadian figures and historical events such as: Louis Riel, the Last Spike, Alexander Graham Bell, the Underground Railroad, the Scottish Highland Clearances, the Klondike Gold Rush, Les Patriotes, the Irish Famine, the Blackfoot, Tom Thomson, the sinking of the Titanic, women and the right to vote, John McCrae & WWI, The Depression, WWII & Elsie MacGill, Hugh MacLennan, Canada joining the United Nations, the FLQ Crisis, the Oka Crisis, and the struggle of First Nation’s attaining the right to vote.

Throughout the performance our music provides the linking thread, which engages the audience in an age-old storytelling tradition. The narratives and songs are designed to relate the stories of people, events and places, as well as to encourage debate and discussion. While dealing sensitively and without cultural bias with these subject matters, the narratives and songs illustrate the integral aspects of our past and also demonstrate the need to explore these issues so that we, as Canadians, may use their lessons to shape our future.

A Brief Canadian History, a uniquely Native-Canadian performance, is especially geared towards the schools, libraries, embassies, cultural centres and the festival network. It provides a forum for debate and for classroom discussion on subjects, which include Canadian history, music, art, geography, literature, political science, and Native issues.

Hutley Addie, teacher at John Rennie High School, Montreal, Queb
A Brief Canadian History is a necessary tool that slides well across the curriculum. We all could benefit from seeing this presentation, if only to take some more pride in who we are and where we, as Canadians, come from. Scott is a proud Canadian, and subsequently, a wonderful educator of that pride.

Mrs. R. Wyse, Teacher at Riverdale High School, Montreal, Quebec
A Brief Canadian History brings together a creative mix of professionalism, humour, and heartfelt lyrics. The presentation was fast paced and interesting. The atmosphere created by questions, answers, slides and music was wonderful.

Arnold Mc Bay, Artist St-Catherines, Ontario
The sound is vibrant, due to Scott’s skillful utilization and blending of diverse and eclectic traditional instrumentation, ranging from the Irish and Native drums to the contemporary electric guitar. North American blues, folk and the indigenous rhythms of his homeland, and his rich Celtic ancestry stylistically influence the music. The varying traditional components and the contemporary approach allow the past to be linked with the present and point a way to the future.

Cameron Noyse, Music promoter Vancouver, B.C.
Although Scott MacLeod’s name is not yet a household name in Canadian music, he is definitely not a stranger to the music business. He has been writing and recording music since his childhood and has performed on stages throughout Canada, America, and Europe.

T’cha Dunlevy, The Link, Montreal, Quebec.
Toes were tapping and people were singing to the catchy ...Sailing 1847, a song about Ireland’s Coffin Ships finished off the set, combining sombre theme with upbeat music.