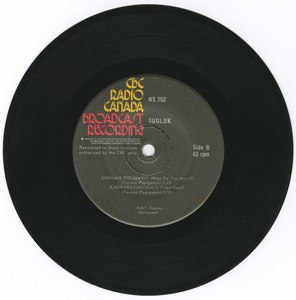 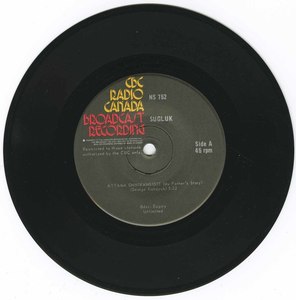 When I was a child I didn't know the meaning of the songs. I thought at the time they were just for fun and that they belonged to the shamans. Now I know they are not only for shamans, they are for the whole world to enjoy.
-Donald Suluk, Inuit singer.

Historical journals dating back to 1752 reveal Greenlandic missionaries may have been the first non-Native settlers to hear traditional Inuit music.

Today, due in large part to CBC Northern Service Radio and its broadcast recordings, traditional and contemporary Native music is very popular among both Native and non-Native residents of the Northwest Territories, Arctic Quebec and the Yukon. Southern Canadians are also gaining a greater appreciation for the unique linguistic and musical styles of Canada's northern talent. Former Prime Minister Pierre Elliott Trudeau and Marcel Masse, Minister of Communications have both enriched their music libraries with CBC recordings of northern performers.

The producer of the Opening Ceremonies of the 1988 Winter Olympics in Calgary was so impressed with Daniel T'len's broadcast recording he invited him to sing “O'Canada” in Southern Tutchone (a Yukon Indian dialect). That performance was heard by hundreds of millions of people around the world.

In order to ensure that there is a strong representation of northern music on CBC radio stations, Northern Service is continuously involved with talent development and broadcast recording production.

Artists are found in a variety of ways. Northern Service Radio production centres in the north recommend people and demonstration cassettes are sent to the producer of broadcast recordings. Others are seen and heard at various concerts in the north. Over the years, more than 75 performers have been recorded.

Recording sessions are generally held at Marc and Snocan Studios in Ottawa. During a four day session, the music is set down on 16 tracks and remixed. Usually four members are used in the backup band. Each is capable of playing more than one instrument. The result is great variety in instrumental sounds.

Broadcast recordings of Native performers began in the early 1970's. Northern Service had long since established radio production centres in the north. However, the introduction of Cree and Inuktitut language programming on the CBC shortwave service to northern Quebec was the true beginning of the relationship.

Inuit listeners were excited at the prospect of hearing their own language and music on shortwave for the first time. As a result, Elijah Menarik, host of CBC's “Isumavut” program received “basement” style music cassette recordings, featuring Inuit performers. The music became increasingly popular even though it was poorly recorded, usually with single voice and guitar.

Producing radio programs with cassettes proved awkward. Control rooms were normally equipped with reel-to-reel and turntable playback facilities. As a result, it was decided seven inch extended play discs would be better for programming convenience.

The Inuit Cultural Institute in Eskimo Point also realized the importance of broadcast recordings in promoting their cultural heritage. The I.C.I. was able to help Inuit composers and musicians receive memberships with performing rights societies, a valuable first step towards putting northern artists on a fully professional recording and royalty income footing.

In the late 1970's a substantial budget was established by CBC Northern Service to enhance the recording sessions. Many Native musicians were flown to a recording studio in Montreal and backup musicians were also introduced.

Altogether, about 120 records were produced during this period, each containing about six musical selections. As a rule 500 discs were pressed for each recording. They were distributed to North American radio stations, as well as music critics. Each artist also received a small supply. Some of the early 7 inch records included:
William Tagoona,
Charlie Panigoniak
Alexis Utatnaq
Alanis Obamsawin
Charlie Adams
William Ekomiack
Hank Karr
Delta Drummers
Morley Loon
Willie Thrasher
Joe Loutchan
Tumasi Quissa
Joanasi Qaqutu and many others.

As well, seven long playing records were commercially produced from these discs. Unfortunately, they are no longer available. Remuneration for the musicians was, and still is, paid in the form of A.F. of M. Broadcast Recording fees and royalties for on-air play. By the early 1980's CBC Northern Service had moved the Montreal production unit to Ottawa. A program director further increased the quality of broadcast recordings. More time was taken in the recording studio with more backup musicians, when required. These records were pressed as 12 inch stereo LP's. Thirty-five 12 inch LP's have been produced, of which an exciting series of seven records are commercially available.