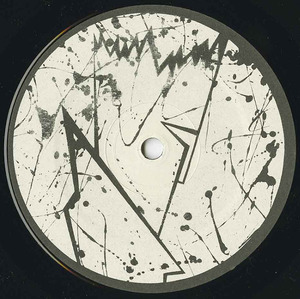 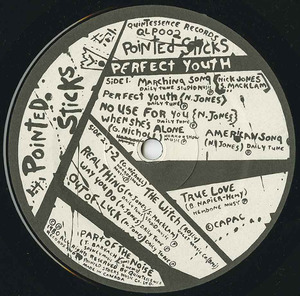 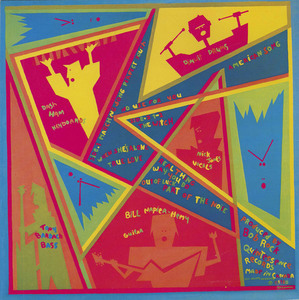 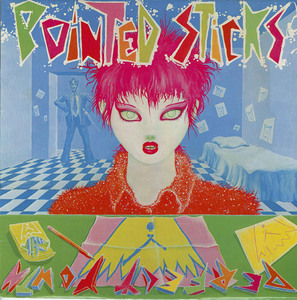 The Pointed Sticks (named after a line in the Monty Python skit 'Self-Defense Against Fresh Fruit') came together in 1978 in Vancouver. They won a Battle of the Bands contest and started releasing singles like "Real Thing", "Out of Luck" and "I'm Numb" on the tiny local independent Quintessence label.

The band then signed to British label Stiff Records at the same time as Madness, and recorded an album with Police producer Nigel Gray. But Stiff was having financial problems, didn't hear a hit and never released the album.

Instead, they recorded Perfect Youth for Quintessence. They also made a cameo appearance in the 1981 Canadian/US cult film "Out Of The Blue" starring Dennis Hopper and Linda Manz.

The band split up in 1981 with Nicholl moving on to Los Popularos (with Art Bergmann); Ken Montgomery (aka Dimwit) would become the drummer for The Four Horsemen.

Several attempts to bootleg the band's material was made during the '80's with 'Waiting For The Real Thing' actually making it to the test pressing stage. The band's material was finally re-issued on CD in 1995 by Zulu Records. Joey Keithley (of DOA) took another stab at re-issues in 2005 on his own Sudden Death Records.

Jones runs merchandise for elite touring acts like the Rolling Stones and Pink Floyd; Napier-Hemy is a music teacher; Nicholl owns a recording studio; Tiles works for Radical Entertainment; Bardach has been finishing a degree at UBC.

The band reunited after the re-issues began selling extremely well in Japan leading to the five original members performing in Japan in July 2006. Two shows in Vancouver occurred in January 2007 and others are planned.
-Dale Wiese and Jen Wold