During the mid- to late '60s, Mock Duck emerged as one of the most popular rock bands on the burgeoning music scene of Vancouver, BC. They were one of a plethora of Canadian bands (alongside peers such as Spring, Papa Bear's Medicine Show, the Seeds of Time, and Hydroelectric Streetcar) who packed local psychedelic ballrooms such as the Village Bistro, Retinal Circus, and Big Mothers in emulation of the San Francisco and Seattle scenes to the south. Although they never made much of an impression outside their local region, they were good enough to support visiting names of the day like Fleetwood Mac, B.B. King, Country Joe & the Fish, and the Steve Miller Band.

Like a whole generation of youngsters, Joe Mock picked up the guitar in the early '60s, spurred on by the pop folk of that era. By 1966 he was good enough to play live, and subsequently formed the first incarnation of Mock Duck with Steve Barrett (drums), Spense Sutton (vibes), Tom Hazelitt (bass), and David Sinclair (guitar). At the time they were calling themselves Joe Mock & No Commercial Potential and were chiefly enamored of folk-rock, particularly Bob Dylan. The band played at the Afterthought, a venue where Jefferson Airplane and Country Joe would sometimes perform. They eventually changed their name to Mock Duck when Sutton's girlfriend, unhappy with yet another band practice, appended a frustrated, four-letter epithet to bandleader Mock's surname.

By the beginning of 1967, the first lineup dissolved and a second version of the band was formed when drummer Glen Hendrickson witnessed Mock performing a solo set and approached him with the possibility of starting a new band. With the addition of bassist Lee Stevens, Mock Duck became a trio and began making the rounds of the local psychedelic scene, which was significant enough by this time to lure artists such as the Doors and Mad River from the States. The trio worked into the next year before Stevens was replaced by Rick Enns and Ross Barrett was brought in on saxophone, flute, and keyboards. They began recording at the nascent R&D Studios, releasing two singles in 1968. The second, "Do Re Mi," received substantial airplay at regional radio stations, although not enough to make any inroads in America. By the end of 1969, this version Mock Duck also dissipated, and Mock formed one more band under the moniker, moving into a psychedelic R&B realm. Follow this group he returned to folk roots and became part of the Pied Pumkin/Pied Pear which continues to exist.

A stellar archival collection uncovered by reissue label extraordinaire Gear Fab, Test Record brings together a group of terribly rare recordings from Canadian band Mock Duck, a deservedly popular draw on the Vancouver ballroom scene due to its arresting musical fusion. The original Test Record was actually just an acetate pressing made of the first five tracks off the Gear Fab CD, only 14 copies of which are know to exist. Those five tracks, along with two of the bonus tracks, were recorded live at the Village Bistro in Vancouver in late 1968. Four of the other bonus songs were off 1968 singles, and the final "Jazz Mock" is a nearly 20-minute jam from the same period.

Better than most, Mock Duck discovered a true nexus between early rock & roll, blues, and exploratory jazz, and they tied those strains into a really exciting amalgam that fit well into Vancouver's developing psychedelic scene . The music certainly has its drawbacks. Rick Enns is only an adequate vocalist, his nasally release (which probably better fit the Dylan slant of the original unit) doesn't create much of a spark at all and is almost devoid of the virtuosic intensity that the music requires. That is no more evident than on the band's cover of "Sitting on Top of the World," one of the few moments on the album when even the band sounds uninspired. The band turns tunes like the 13-minute "Home Made Jam," the traditional "My Time," and the cool "Jazz Mock" into smoking free-rock with plenty of psychedelic ambience to satisfy the trippy mood of the era.

Rarely, however, is Mock Duck predictable, and their sound is all their own. A creative and individual band, they sound great even outside the context and milieu in which they existed. Although maybe not as inventive as likeminded peers such as Captain Beefheart, Spirit, and Traffic, they are nevertheless a dynamic footnote to the era.

Do Re Mi b/w Playing Games

Ground Hog b/w Hurt On Me 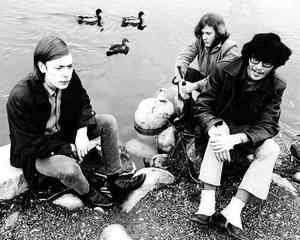 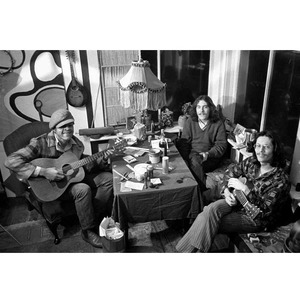