For over a decade, Matt Masters has marked Canadaʼs artistic landscape. Known widely as “the Alberta Reporter,” we picture Matt with his moustache and hat, singing songs of the land. Dressed along the lines of Porter Wagoner or Hank Williams in fine western wear, we see Matt around a campfire, we hear his northern voice through the windshield driving across the prairie.

Flash forward. Mexico City. Matt is in a club singing about Saskatchewan. Sure this crowd has heard of Canadian music before, but who is this guy in the Smithbilt talking about highway driving and the Aurora Borealis? The next time we see Matt heʼs at centre ice at the Flames game, singing a song about hockey and bringing Canadian folk music to crowds of sports fans.

Suddenly, weʼre in the Arabian Desert. Matt Masters is on stage, the first man to EVER bring a C&W band to the Emirate of Qatar. Now, itʼs a church. In Toronto, for Nuit Blanche, or is it the Montreal Biennalle? Either way, thereʼs Matt Masters. This time heʼs performing his award winning country and western musical, Don Coyote.

The National Post says his work has ʻstrong ties to social justice and community building.ʼ The Montreal Gazette says he was ʻborn to sing country music.ʼ The Red Deer Express says he wields a remarkable voice, they call him a ʻtrue country and western singer in the traditional sense.ʼ They go on, ʻA historian with a keen sense
of the modern era, Masters intertwines his western heritage with a forward-looking vision.ʼ

With his new album, ALL-WESTERN WINNERS, Matt Masters lays out the blueprint for what is coming in Canadian country music. He has grabbed the sounds of the prairie by their roots and used the future as a fertilizer to grow a crop of Canadian songs that will serve to feed a generation. The sound is heavier than ever before as Masters carries his voice to new heights. Traditional 21st century western Canadian folk music. World and Canadian music, Alberta style. 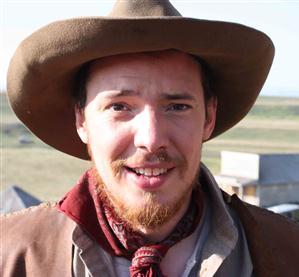