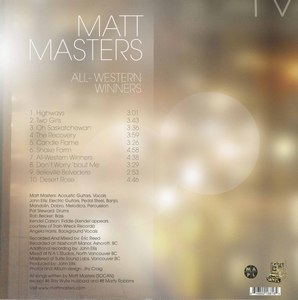 The last few years have been a wild ride for gentleman cowboy Matt Masters. Travelling from Manitoba to Mexico City and beyond, the Albertan songwriter has tirelessly laboured to spread his rootsy brand of country western around the globe. Taking a moment to marvel at the Ottoman Empire’s convex domes and creating his own plaid-shirt oasis amidst the shifting sands of Qatar, Masters has surveyed exotic realms, forging great friendships and new fans in the process.

“Having the opportunity to go over to Qatar was definitely a feather in my cap,” confirms Masters. “I brought a four-piece band with me to perform on behalf of the University of Calgary campus there, and we held the country’s first ever Stampede breakfast on Valentine’s Day of 2010. The previous year, I was able to visit Turkey, where I wound up playing at a Canada Day event for the Canadian embassy in Ankara.... It showed me that your borders are where you place them. You can go as far as you want.”

Setting his sights south, Masters recently ventured down Mexico way to meet up with fellow musicians from ska/salsa group Los De Abajo. Two weeks and six gigs later, the honky-tonk hombre is sold on the vibrant bustle of one of the biggest cities in the world.

“It’s the perfect example of building your own job, taking it where you want to go. I mean, how many Canadian bands try to hit Mexico City? Twenty-five million people live there! It’s like anything you do in Calgary times 25!”

“I find that the key to success is really pushing your boundaries and seeking out new ways to keep yourself interested in the industry. The neat thing about the band right now is that we can do different things,” Masters continues. “Whether we’re at a club that plays classic country or heavy metal, we can take a broad view and rock out heavy when we want to or switch it up and pull off a Freddy Fender song in Spanish. I like to keep the audience on their toes.”

With three and a half decades tucked under his belt, the newlywed Masters seems ready to face his most daunting challenge yet: parenthood. Add the delight of releasing his first album in three years, and you’ve got the makings of a legendary run of summer engagements.

“I did the recordings for the new album All-Western Winners (Saved by Vinyl) with John Ellis last October,” he says. “John’s worked as a producer in the country music industry for years and but he also appreciates that rock dynamic. Johnny saw me rock out in Carstairs and said ‘I like this.’ So we flew off to Kamloops and recorded for five days. The songs are a very diverse mix — ‘Oh, Saskatchewan’ is a tune I wrote 10 years ago and it came out on my first ever release.... People close to me have commented that it doesn’t sound like Matt Masters at all; they say it sounds more like Danzig, or something.”

Huh? “It’s true that the more rocking songs like ‘Snake Farm’ do have to be played with your feet wide like Ramones-style,” he explains. “Yes, it’s just one of those tracks people fall in love with. And ‘Snake Farm’ just sounds nasty.”

Slated to mount the stage for Ontario Council of Folk Festivals in October and rally around the WCMAs in the Yukon later this year, Masters also is pairing up with Barney Bentall for a side project known as The Grand Cariboo Opry. In the meantime, he’ll be going against his own non-competitive nature by throwing his hat into the ring at the Stampede’s Nashville North Star 2011, hoping to gain the honour of opening for Kenny Chesney at the Saddledome.

“So far, I’ve only got 18 gigs lined up for Stampede this year, but it’s not unusual to get last-minute requests. I never miss a Stampede; for a country musician, it’s the biggest week of the year,” he says. “I don’t know if people fully realize what a huge music festival it is. Maybe they get blinded by the cowboy hats, but if you look around you’ll see dozens of musical acts happening all over the city. It’s one of the few times of the year that the whole city adapts to a festival mentality. The Stampede is coming of age, turning 99 this year. As a champion of Alberta arts and culture I can say that a lot of people in other parts of the country look at Calgary as ‘the little kid,’ culturally speaking.”

“Of course, sometimes I want to strangle it and slap it upside the head every now and then, but I am very proud that we are on par with civic celebrations of this calibre.”
-Christine Leonard, Fastforward