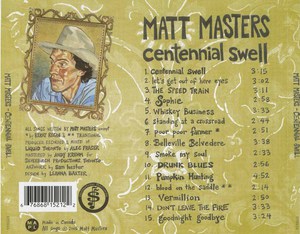 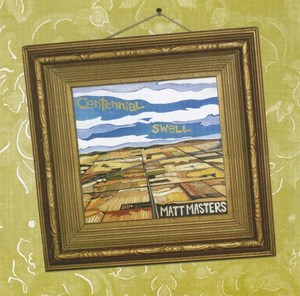 He's not a cowboy, just a country and western singer who plays it in a good, old way. This is Matt Masters' first album. Drawing from the honky-tonk and outlaw books of sound, Masters calls out across the prairies to the echoes of Ian Tyson with this solid collection of Western Canadian originals. Having lived and learned all across this country, Masters has filled his twin saddle bags with experience and success. He's drummed for the Dudes of Calgary and strummed alongside luminaries like Jeff Healey and Blue Rodeo. Masters broke out on the open road with the Gentlemen of the Rodeo, his kith and kin last year. Having won songwriter awards and been honoured by politicians, he's become a fine example of what this nation's mid-west is capable of. Masters is a multiple talent, one unfazed by gunfire and as steady on his feet atop an Albertan oil slick as he is amongst the city slickers of Toronto. Swelling with a hundred stories you won't mind listening to, Masters is one to gather 'round.
-Travis Richey, Feb 14, 2007, exclaim.ca

Centennial Swell was recorded in Toronto in late 2005 by award winning producer Alec Fraser and features Matt performing with an all-star band that includes some of the top session musicians in Toronto.

Centennial Swell features 13 of Matt original tunes and two counry classics. Full of songs about trains, food and floods, songs of whiskey and songs of warning, Centennial Swell is a contemporary classic.
With his signature vocals that have drawn attention nation-wide, Matt Masters debut CD heralds the arrival of a strong new voice on the Canadian country and western scene.