"Tim’s awesome. He’s one of my favorite Canadian songwriters. Nobody captures the rough-and-ready frontier imagery better than him.”
- Corb Lund

"I've been looking for 30 years for a young guy who's proud to write songs about our country. I'd like to pass the torch to Tim Hus"
- Stompin' Tom Connors

He can come at his audience like a runaway rig, while firing off image bound lyrics with the marksmanship of a western gunslinger. Tim Hus will make you sit up and pay attention to his songs, story songs that capture the pioneering spirit that motivates and inspires truck drivers, miners, rum runners, trappers, men of the land, men of the sea, and vagabonds.

He's an Albertan through and through and one who takes the history of Canada seriously. One who looks deep into the eyes and souls of his subjects and finds out what makes them tick. He's an artist who creates his songs from a place of deep respect and understanding, and Hus has never been more on the mark than with Hockeytown, his latest album for Stony Plain Records.

Part of a new generation of Alberta-based songwriters who have been nurtured on the tapestry of sounds that country music served up in the sixties and seventies, Hus points to many life experiences and the influences of family and specific musicians when it comes to assessing his own make-up as an artist. “I look up to Waylon Jennings and Willie Nelson, and road dogs like Fred Eaglesmith. Then there's all the people I meet out on the road and the stories that come with those introductions,” says Hus who believes, and understandably so, that his songwriting has moved up to another plateau with this new batch of 12 songs found on Hockeytown.

“I’m drawing on my sources of inspiration for the songs more clearly than ever, and these songs, from the title track to North Atlantic Trawler and Red River Flood, just seemed to write themselves,” adds Hus while lounging on the control room couch of Homestead Recorders in Edmonton, where he cut all the material with his tireless road band and a handful of special guests.

Barry Allen, the award-winning engineer and producer, who co-produced the sessions with Hus couldn’t agree more with that assessment.

“The ideas on all these songs are really solid, and there’s some very poignant moments here lyrically,” offers Allen, who also worked extensively with Hus’s longtime pal and peer Corb Lund.

“We looked at airing things out sonically with this recording as well. Giving the songs room to breath. The end result is an album that sounds much more minimalistic, but where everything counts. And Tim’s vocals are his strongest performances on record to date by far,” adds Allen, who also passed on the mastering work to American engineer Bill Wolf, who helped make so many recordings from American masters like David Grisman, Tony Rice and Jerry Douglas shine.

For Hus it has been an exciting year on any number of fronts, not just in the studio, as he continued to deliver songs from his previous Stony Plain album, Bush Pilot Buckaroos to audiences all over the map.

The summer of 2009 saw the lanky and likeable artist tapped to back the legendary Stompin’ Tom Connors on a number of dates across the nation.

“It’s not a secret that Tom is one of my heroes and it was quite the time out on the road with him. I could tell you all sorts of stories, but we’ll leave those for another time,” laughs Hus, who was honored to work with Connors.

Connors made his appreciation for Hus’s songwriting skills known as the two parties played before large and enthusiastic crowds that were served up a double-barreled blast of true blue Canadiana.

On many occasions Connors let it be known, to friends and fans, that he believes Hus is the man he is passing his mantle to.

Like so many of his fellow Canuck story-tellers and songwriters, Hus doesn’t shy away from a long haul of touring dates, and partaking in those road wars also provides its fair share of inspiration when it comes to writing about this land. 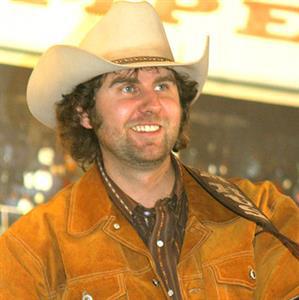