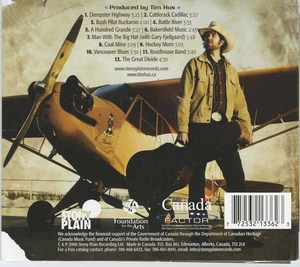 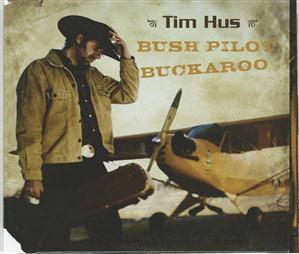 If you haven’t yet jumped on the Tim Hus musical bandwagon… you’re missing one of the better things that has happened in Cancountry in recent times. Hus, from Alberta, is the ‘real deal’ when it comes to creating musical images of ‘Backroads Canadiana’. He writes unique songs about unique Canadian characters, places and things… a modern day Stompin’ Tom Connors with some Lightfoot and Tyson thrown into his stylish creations.

Bush Pilot Buckaroo marks Tim Hus’ third album outing, following neatly on the footsteps of his 2004 Alberta Crude and 2006 Huskies & Husqvarnas ground-breaking albums; but this time around he has the support of front line indie label Stony Plain Records, and that should help in creating the national exposure that Tim Hus' music deserves.

Bush Pilot Buckaroo is again filled with Tim Hus’ original tunes, although he does treat us to a couple of ‘outside’ items here in a cover of the Stompin’ Tom Connors tune Hockey Mom (a relatively obscure sequel of sorts to Connors classic The Hockey Song); and a version of the Steve Fromholz folksy tune Man With The Big Hat, on which Hus has invited Canadian Hall of Famer Gary Fjellgaard to sit in as a special ‘story-telling’ guest.

The knockout item on the album comes in the honky-tonk flavoured Bakersfield Music. Here Tim tells us that even sitting in a bar in Ft. McMurray, with a jukebox filled with Merle (Haggard) and Buck (Owens) and with his own band on stage, the ‘Bakersfield Sound’ always has a home with diehard country music fans.

Other winners include the cowboy lament Battle River, and the story song The Great Divide, both tunes oozing with an obvious Ian Tyson influence; while the honky tonk tune Vancouver Blues, and the Waylon Jennings inspired Roadhouse Band, all have enough commercial appeal to warrant country radio airplay.

Listen also for some of Tim Hus’ Canadiana appeal in Dempster Highway, the title track Bush Pilot Buckaroo, Cattlerack Cadillac, and A Hundred Grande, a tune that will put smiles on the faces of the many Maritimers who have ‘gone west young man’