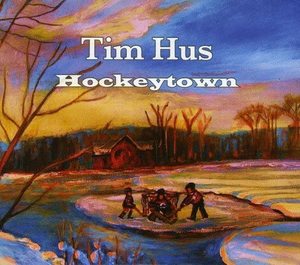 Tim Hus, the walking definition of a true Canadian artist, will make you sit up and pay attention to his songs, story songs created from a place of deep respect and understanding, and Hus has never been more on the mark than with HOCKEYTOWN, his latest album for Stony Plain Records.

The subject matter covers all of the regions of Canada – songs about Saskatchewan gophers, Ontario steelworkers, the blue Atlantic shore, hunting that elusive Sasquatch and all of the Hockeytown’s in between. Tim takes the history of Canada seriously. He looks deep into the eyes and souls of his subjects and finds out what makes them tick.
Tim’s profile got a huge boost last summer when he was personally invited to go on tour with Stompin’ Tom Connors. It was Tom’s first tour in eight years and went from Ontario to Newfoundland. The tour was so well recieved that Tom is bringing Tim as a special guest to western Canada this summer for a concert event that is truly The most Canadian show in the country

“I’m drawing on my sources of inspiration for the songs more clearly than ever, and these songs, from the title track to North Atlantic Trawler and Red River Flood, just seemed to write themselves,” adds Hus while lounging on the control room couch of Homestead Recorders in Edmonton, where he cut all the material with his tireless road band and a handful of special guests.

Barry Allen, the award-winning engineer and producer, who co-produced the sessions with Hus couldn’t agree more with that assessment. “The ideas on all these songs are really solid, and there’s some very poignant moments here lyrically,” offers Allen, who also worked extensively with Hus’s longtime pal and peer Corb Lund. “We looked at airing things out sonically with this recording as well. Giving the songs room to breath. The end result is an album that sounds much more minimalistic, but where everything counts. Tim’s vocals are his strongest performances on record to date by far,” adds Allen, who also passed on the mastering work to engineer Bill Wolf, who helped make so many recordings from masters like Willie Nelson, Allison Krauss,and Tony Rice shine.

"I've been looking for 30 years for a young guy who's proud to write songs about our country. I'd like to pass the torch to Tim Hus"
- Stompin' Tom Connors