When Lisa Marr, Robynn Iwata and Valeria Fellini formed cub in early 1992, the plan of three Vancouver friends (who had met while working at CiTR, the campus radio station of the University of British Columbia) was to get together in the basement to write and play music and have fun doing so. Simple as that. The fact that they were virtual neophytes at their respective instruments did not hinder them; and despite having no grand aspirations, the trio were determined and steadfastly D.I.Y. Iwata even had to play sitting cross-legged on the floor for the first several months because as she herself admits, “I just needed to keep a close eye on my hands and my chord cheat sheets, and in cub that wasn’t a crime. It wasn’t a gimmick. I wasn’t trying to be twee. We always encouraged one another to just do our best by whatever means and at whatever stage we were at.” Mint Records’ co-founder Bill Baker recalls, “It was pretty charming to see this girl sitting onstage, cross-legged. [laughs] It was pretty good, actually. More gutsy than anything.”

As a result, their decidedly rule-breaking, self-taught-from-day-one approach and lo-fi recordings caused quite a stir, ruffling a few feathers in the musical establishment from the get-go. However, the girls refreshingly unbridled and enthusiastic ’crush pop’ (or if you prefer, ‘cuddlecore’) sound, as well as Marr’s knack for penning a deceptively simple and infectiously catchy lyric, swiftly endeared them to music lovers across the board and around the globe. Indeed, their plucky gumption to get out there and play before they were ‘camera- ready’ would inspired many to start their own bands or pursue other creative endeavours. “A lot of girls have told us that they’ve started playing music because of us. That, to me, is really cool,” Marr told Rolling Stone Magazine.

As Smugglers’ frontman, CBC Radio host and former Mint Records PR ace Grant Lawrence describes in his 2017 tell-all tome, “cub's deceptively simple, incredibly catchy twee-pop timing was perfect. The early 1990s was dominated by dreary, dark and distorted grunge music played mostly by men. cub provided the musical opposite, a sunny antidote to the male storm clouds, at least in sound anyway, creating a unique style of indie-rock that was eventually branded ‘Cuddlecore’” - the micro genre originally coined and bestowed upon cub by Iwata’s friend and Zulu Records cohort, Nicolas Bragg (then guitarist for Blaise Pascal and later for Destroyer).

Campus and community radio DJs throughout North America were quick to catch on. By February of 1993, cub’s debut record had hit #6 in the Canadian college radio charts. The 6-song vinyl 7” titled pep was produced by Mecca Normal’s Jean Smith and released on Mint Records (fyi, the label was the brainchild of Iwata’s brother Randy and Marr’s then-boyfriend Bill Baker). By August of that same year, the band would find itself stationed at that very same spot in the charts with hot dog day, their second 6-song 7”, also on Mint.

In a 2013 interview, Jarrett Samson frontman for the then newly signed to Mint Records band Tough Age declared, ”My answer for favourite Mint record has to be something by Cub. Cub are one of the bands that changed my life, and for me their best release is Hot Dog Day. Why? It’s perfect, that’s why! Any record with ‘My Chinchilla’ is automatically better than most records, and it’s not even my favourite song on the seven-inch.” Tough Age would go on deliver their own homage to cub with a complete redux version of that very record.

The trio was further buoyed by late night luminaries Brent Bambury (CBC radio/Brave New Waves) and David Wisdom (Night Lines). Both hosts championed cub pretty much from day one. Years later, Wisdom would pen the liner notes for their post-breakup compilation cd Mauler (released on Australia’s Au Go Go Records). “Cub was a very do-it-yourself band – that was one of the great things about it – which was the essence of punk. Years after punk, they were still carrying on a great tradition in a fresh way. I loved it.” Bambury included cub’s cover of Motorhead’s “Killed by Death” (originally released on The Mint is Still a Terrible Thing to Taste compilation) on a ’90s music themed mixtape that he compiled to commemorate Brave New Waves’ 30th anniversary.

By early 1993, cub was ready to hit the road. However, commitments to her handmade chocolate business prevented Fellini from traveling, so Marr and Iwata invited their friend Neko Case to join them as drummer. Now, this wasn’t an unprecedented, blind recruitment. Case had already showcased her fledgling talent with cub during a recording session at Yoyo Studios in Olympia, WA. When Fellini’s touring fill-in (and Case’s then-boyfriend) David Carswell (guitarist for The Smugglers and later co-owner of JCDC Studios in Vancouver) ran out of steam mid-set, she volunteered her drumming services on the spot. It worked, Case was in, and the group was now mobile. And so it was that cub — Lisa, Robynn and Neko — embarked on their very first cross-Canada/U.S. tour in support of their Vancouver brethren and label mates The Smugglers, NoMeansNo’s alter ego the Hanson Brothers and Tacoma, WA’s Seaweed in the Spring of 1993. Almost two decades later, Case would affirm, “I went on tour as a fill- in drummer for Cub, and I was hooked. Touring and playing live shows was the life for me.”

By mid-May, after having personally introduced themselves to five Canadian provinces and three U.S. states, cub’s buzz had swelled substantially, and it was during this ascent that they reached Montreal for their show on the 18th. For the most part, the band’s live setlist of about sixteen short and sweet tunes had remained consistent from day one of the tour, but after just two solid weeks on the road, the training wheels were off, and the band had really found their stride. Driven by Case’s primal-but-musical thump and fueled by several buckets of actual bubblegum (which they shared with the audience each night), their performance had developed an unassuming confidence and feisty spirit peppered with Marr and Case’s snappy stage banter, and... Iwata was now standing.

Over the course of the next three years, the band toured tirelessly — once more with Neko and the rest of the time with new member Lisa g Nielsen on drums — showering bittersweet upon their ever- increasing and rabid fan base. Instant converts were also made while sharing stages with the diverse likes of They Might Be Giants, Sebadoh, Elliott Smith, Yo La Tengo, Sloan, The Muffs, Magnetic Fields, DOA, Rancid, NOFX, Seam, The Coctails, Sun Ra Arkestra, De La Soul, The Evaporators and Zumpano as well as several of their Mint and Lookout! label mates such as The Queers, Mr. T Experience, Pluto, The Hi-Fives, Huevos Rancheros and Pansy Division. “Despite being tired or having a bad show, something going wrong, or being away from home all that time, each and every one of us sits back and says, ‘I can’t believe I'm doing this.’ Just to record songs we’ve written, make videos, and travel around and meet people, it’s an amazing way to live your life,”[8] Marr effused in late 1995.

In the recorded realm, cub’s sonic bubblegum would continue to pop with their October 1993 debut full length Betti-Cola (which would be ensconced at #1 on the Canadian college radio album charts for months) and its 1995 follow-up Come Out Come Out. When the two albums were freshly reissued in 2007, Pitchfork’s Marc Hogan hailed them as “endearingly awkward reminders of a free-spirited enthusiasm too often missing in today's crop of licensing-ready indie- pop upstarts.... Cub landed squarely on the side of the angels. And that's totally punk rock.”

The band’s swan song Box of Hair followed in 1996. All three albums were released on Mint Records and served as further time capsules of the band’s creative evolution. On the occasion of Mint’s 15th anniversary in 2006, label owner Randy Iwata “count[ed] cub’s many achievements among his highlights....‘We were there to document [the band’s] evolutionary arc.’”

Come Out Come Out

Mauler! A Collection of Oddities

The Beautiful and Damned (split with Cub)

The Day I Said Goodbye (split with The Potatomen) 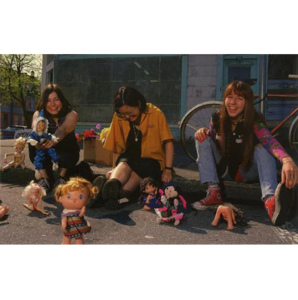