Gwendolyn Dianne Brooks (January 3, 1939 – April 29, 2005), was a jazz singer from New Jersey. With the Three Playmates, Brooks recorded several songs in 1957. She moved to Toronto shortly thereafter. As a solo singer, she recorded two albums and several singles. Her biggest solo hit was "Walking on My Mind" in 1969. Brooks died on April 29, 2005, in Toronto from chronic obstructive pulmonary disease.

African Canadian vocalist Dianne Brooks has inspired music performers and audiences around the world since beginning her musical career almost 50 years ago. A generous inspiration to many younger performers, Brooks musical style encompasses Jazz, R&B, Pop, and of course the Blues. Born in New Jersey, Brooks began singing in church at the early age of 3. Her mother recognized her budding talent. She soon sent Brooks to study voice in New York City. Brooks even made a record before moving with her family to Canada in the 1950s. The versatile songstress reminisced about her early days in the music business in our recent telephone interview. “My first professional job was with a group called The Three Playmates. We had a hit record called Suga Wuga in the early 1950s on Savoy Records. When we moved to Canada, Bill O’Connor, an entertainer who had his own agency, started me working on TV shows for the CBC, lots of benefits and clubs.”

Soon Brooks hooked up with Al Steiner and became a favourite performer at legendary Yonge St club, The Bluenote. A popular choice with show producers, Brooks has performed and toured with Count Basie, Bette Midler, Thad Jones, Boz Scaggs, the Boss Brass. She has been featured on the same stage as the Supremes, Natalie Cole, Mel Torme and others too numerous to mention in this limited space. Looking back at the past half century, Brooks comments on the music industry today. “There are more opportunities for Black performers today. When I first started Phyllis Marshall and Joey Hollingsworth were the main recognized Black names in the (music industry). As well as a few Jazz musicians like Ray Downes and Archie Alleyne.”

Brooks quickly adds that while music industry has seen a rise in the visibility of some Black artists, back then there were more places to perform. She would like to see fewer clubs closing and more places for musicians to play. Her own productive career has taken her from the musical stage to TV and film screens. We saw her as Laverne Baker in Paramount’s American Hot Wax and heard her sing with the group Love and Kisses in the movie as well as recording the title song “Thank God It’s Friday”. She has recorded several of her own albums on various labels and has appeared on recordings by Gino Vannelli, Bette Midler, Herb Alpert, Dusty Springfield, Emmy Lou Harris and Anne Murray. Adding to Brooks’ popularity have been guests spots on TV shows Kenny Rogers‘ Rolling On The River, David Clayton Thomas, Midnight Special, The Dick Clark Show, The Lou Rawls Special, and many more.

Beloved by audiences for her R&B renditions, Brooks admits that of all the styles she loves to perform Jazz is the closest to her heart. “I think it (Jazz and Blues) all comes from the same place, probably from the creation of Dixieland we have the combination of Jazz and Blues. For the Women’s Blues Revue I’ll be singing Rhythm and Blues.

Brooks’ comment reminded me that the Toronto Blues Society Women’s Blues Revue is a major forum for Blues performers in Canada – and attendance has increased with every show during its 10 year history. During the past decade this event has evolved into a unique cultural mainstay promoting the abundant talented voices and musicianship of Canadian Blueswomen. On November 30, 1996, the TBS fine tradition exposeD some of this country’s best emerging and established women Blues performers.
-torontobluessociety.com

Back Stairs of My Life

Back Stairs of My Life

Walkin' On My Mind

Show Him (He's Not Alone) b/w Show Me 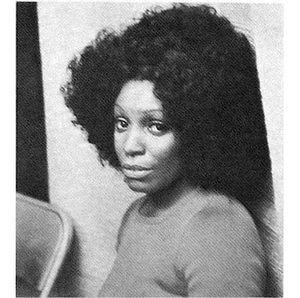