Brooks, Dianne - Some Other Kind of Soul 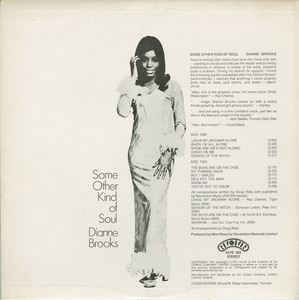 Diane Brooks - Some Other Kind of Soul BACK 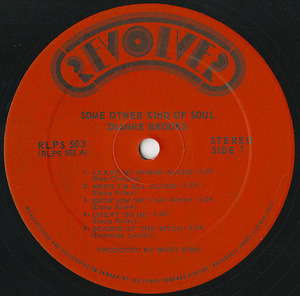 Diane Brooks - Some Other Kind of Soul LABEL 01 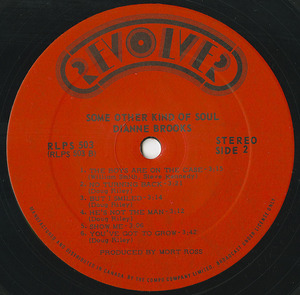 Diane Brooks - Some Other Kind of Soul LABEL 02 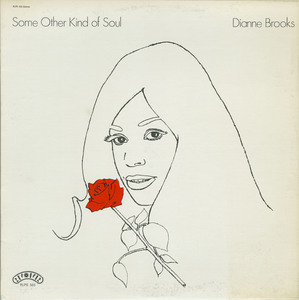 Dianne Brooks was born in the U.S. and started singing in church at the age of three. Her first professional experience was as part of a New Jersey trio called The Three Playmates, who had a hit with "Suga Wuga" on the Savoy label. By the 1950s her family had moved to Toronto, where she became a popular performer at The Bluenote Club on Yonge St. and toured throughout Ontario, Québec and New York. Her first record in Canada, "The Orbiteer Twist," was a commercial for a toy which also marked the first recorded performance of Robbie Robertson, then with The Hawks. In 1966 and '67 she made a few recordings on Verve with bassist/producer Harvey Brooks (no relation) and formed The Soul Searchers (not to be confused with the multitude of other bands named The Soul Searchers). However, neither venture met with much success, and she subsequently found work as a touring backup singer for Count Basie, Bette Midler, Boz Scaggs and The Boss Brass and appeared on recordings by Funkadelic, Bette Midler, Herb Alpert, Dusty Springfield, Emmylou Harris and (a gig's a gig) Gino Vannelli and Anne Murray.

She never hit the big time, but in 1970 she recorded the LP "Some Other Kind of Soul" on Revolver, which featured Lenny Breau on guitar and the vague blurb "Man, she's music!" attributed to Count Basie on the back cover. The standout track is a funky cover of "Season of the Witch" by Donovan, and the whole album is cool, classy soul with impressive arrangements for guitar, bass, drums, flute and horns by Doug Riley.

Dianne Brooks got her start in show business at a very young age. Her first professional success was as a member of a trio of New Jersey teenagers, the Three Playmates. Serious students of R&B music of the late '50s will be familiar with the group's work, or at least with their lively hit "Sugah Wooga" from 1957. Unfortunately, "Sugah Wooga" / "Lovey Dovey Pair" (Savoy 1528) was the group's final recording: "Giddy-up-a-ding-dong" / "It Must Be Love" (Savoy 1523) and "Give Your Love To Me" / "(Do-oo, Do-oo) I Dreamed" (Savoy 1537), had been recorded earlier in '57 but made little impact. ("It Must Be Love" eventually resurfaced on the Savoy Jazz LP, Doowop Delights.)

Michel Ruppli's impresive Savoy discography tells us that the first four songs were recorded in New York on July 26, 1957. Arranged by Ernie Wilkins, the session featured an impressive cast of characters: Kenny Burrell on guitar, Budd Johnson on baritone sax, George Barrow and Jerome on tenor saxes, Sam Price on piano, Joe Benjamin on bass, and Bobby Donaldson on drums. Unfortunately, information on the "Sugah Wooga" session is sketchier: Ruppli reports only that the two songs were recorded in New York on October 22, 1957, and that the orchestra included Buddy Lucas on tenor sax, Bobby Banks on organ and Leonard Gaskin on bass.

Of the Three Playmates themselves: Lucille and Alma Beatty were sisters whose exuberant voices blended so well to create the magic of "Sugah Wooga" (with Lucille singing the verses); and Gwen (i.e., Dianne) Brooks possessed both a distinctive sultry voice (as displayed on "Lovey Dovey Pair") and exceptional songwriting talent. "It Must Be Love", "Give Your Love To Me" and both sides of the hit were Dianne's own compositions. (The last two were co-credited to producer Ozzie Cadena, but that does not mean that he contributed equally; Cadena was similarly credited on Nappy Brown's "The Right Time".) It is something of a testament to Dianne Brooks' talent -- even as a 19 year-old -- that her material was recorded at sessions involving such heavyweights.

It is impossible to say how far the Three Playmates might have gone had they stayed together, but Alma Beatty's pregnancy put an early end to any dreams of stardom. The trio's manager dropped them as soon as he heard -- taking their stage outfits with him -- and relations with Savoy sank in a sea of bitter recrimination. None the richer financially for their efforts, the group did at least have the opportunity to tour with Little Richard and to perform at venues like the Apollo in New York and the Howard Theater in Washington. And they got to meet and learn from the other artists on the bill: Betty Carter, the Cadillacs, the El Doradoes, the Dells, Jackie Wilson and Dinah Washington -- who got everyone to stop wearing white gloves so they wouldn't look like Al Jolson. Following the demise of the Three Playmates, Dianne signed on with a long-forgotten R&B act booked into southern Ontario in the early '60s. In Toronto she impressed bandleader and agent Billy O'Connor so much that he immediately offered to find her work. While O'Connor arranged for the necessary immigration and work permits for Canada (which took some time), Brooks headed home to New Jersey to ready herself and her young daughter for the move north.

Resettled in Toronto, Dianne went to work right away -- in the clubs and very occasionally on record. Her first record in Canada, "The Orbiteer Twist", was essentially a commercial for a new toy. While Brooks is now dismissive of the song, which she wrote, Billy O'Connor is much more generous in his assessment, noting what a great job Dianne did in turning a corny idea for a commercial into something that 'really swung'. Whatever its musical merits, the session is perhaps most notable for the fact that Robbie Robertson, then still with Ronnie Hawkins and the Hawks, played lead guitar in a rare session appearance.

Aside from this one record and numerous appearances on local CBC television shows like While We're Young (hosted by singer Tommy Ambrose), not much happened until the heyday of the Club Bluenote on Yonge Street, Toronto's heart. In 1964 Dianne (and daughter Jo-Ann) joined Jack Harden and the Silhouettes, an established part of Toronto's bustling R&B scene, teaming up along the way with Silhouette sax player Steve Kennedy.

In 1966 Brooks and Kennedy split away to form the Soul Searchers with singer Eric Mercury, guitarist Terry Logan, organist William 'Smitty' Smith and drummer Eric 'Mouse' Johnson. Toronto-born Mercury had previously played the Apollo as a member of the Pharoahs and had recorded "I Wondered Why" / "Softly" (Clip 1122) backed by the Silhouettes. Smith and Johnson, from Virginia originally, had been playing with the prolific Montreal-based Billy Martin Orchestra.

The new group featured phenomenal vocal strength - Brooks, Mercury, Smith and Kennedy were all very capable lead vocalists -- although the only recorded evidence of their ensemble work is some background vocals recorded in the summer of '67 for the Mandala's Soul Crusade album (Atlantic 8184). Still, there was no big break and the group's numerous appearances on the Music Hop teen TV show were just about the only regular relief from grubby club work all over Ontario and Québec and across the US border to Buffalo.

The closest thing to the big time was a couple of forays to New York in 1966 and '67 to record with bassist-producer Harvey Brooks (no relation). Ruppli, in his Verve discography, tells us that four songs were recorded at a session on November 17, 1966: "I Just Don't Know What To Do With Myself" / "In My Heart" (Verve 5036), "Sometimes I Wonder" (a Brooks-Kennedy original, and the B-side of Verve 5055) and "Into Something Good" (unissued). Two more numbers were recorded the following March 15: "Picture Me Gone" (Verve 5055) and "Say Something Nice To Me" (unissued). Unfortunately, none of this first-rate soul material -- all of it magnificently performed and produced -- managed to click.

However, it does seem that someone noticed Brooks', massive talent, as within a year or so she was touring as featured vocalist with the Count Basie Orchestra - playing San Francisco, upstate New York and the Esquire Show Bar in Montreal. Then it was back to Toronto, where Dianne soon found herself working with some of her old chums from the Silhouettes and Soul Searchers. First Doug Riley, the Silhouettes', keyboard whiz, got her into the studio to record the stunning "Need To Belong" / "Walking On My Mind", for the new Revolver label (Revolver 001). Then she and label-mates Motherlode (with Steve Kennedy and Smitty from the Soul Searchers) helped each other out with their respective album projects. Dianne contributed a song, "Memories of A Broken Promise" and some background vocals to Motherlode's When I Die album (Revolver 501; now available on CD as Pacemaker 008). In return Motherlode contributed a song and instrumental backing on Dianne's album, Another Kind Of Soul (Revolver 503), from which "Show Him (He's Not Alone Anymore" / "Show Me" was released on 45 (Revolver 003). (Pacemaker plans to reissue the album early in 1997.)

The jaunty Motherlode sound is apparent on a number of the tracks, but on others the backing is much fuller and richer -- producer Doug Riley having called in his then-colleagues from Toronto's premiere big band, the Boss Brass. Considering how well they all worked together on record, it is not surprising that Dianne Brooks was taken on by the Brass as featured vocalist, singing jazz with them at George's Spaghetti House in Toronto for three years. (While Brooks has long since ceased to be involved in the group, the Boss Brass lives on and has in fact won a number of Grammy awards for its work.)

The 1970s were busy years for Dianne Brooks. She was very much in demand as a backup vocalist on the increasingly hectic Toronto recording scene, working for everyone from Anne Murray to Funkadelic -- on the brilliant America Eats Its Young, recorded when the group lived in Toronto in the early '70s. She lent her voice to "Try A Little Harder" / "The Land" (GRT 1233-06), the impressive debut single of the Doctor Music gospel-R&B (and later jazz) group asssembled by Doug Riley. (The earliest incarnation was essentially a studio group including Doug Riley, Steve Kennedy and guitarist Terry Bush from the Silhouettes, Mouse Johnson from the Soul Searchers, and a veritable choir of Toronto's top singers.)

However busy Dianne was, the closest thing to a record release of her own during this period was a five-song set recorded in 1974 by the Canadian Broadcasting Corporation for airplay at its radio stations across the country (LM 404). Interestingly, the material recorded for this rather low-key project -- four originals from the pen of arranger John Capek, plus the Cahn-VanHeusen chestnut, "I'll Only Miss Him" -- is what Dianne looks back on with the most satisfaction. As she says on the album jacket, "The day that I can get myself into something and don't have to sing background vocals anymore, it'll be the greatest day of my life."

In 1976 Dianne put together a nightclub act, and also recorded a second album, Back Stairs of My Life (Reprise 2244) -- this time with producer Brian Ahern. Despite some outstanding performances -- and vocal and instrumental help from Bonnie Raitt, Anne Murray, Amos Garrett, Billy Payne of Little Feat, Smitty of Motherlode, Mouse of the Soul Searchers and many others -- the record was largely ignored. A subsequent change in management did little in the great scheme of things, but at least took Dianne to Australia for a string of engagements in 1979.

The 1980s carried Dianne first to Los Angeles, where she joined the group Kitchen (who'd just left Sergio Mendes), and then to New York where she recorded "Go Away" / "Drums", (Town House 1051), both co-written by her manager at the time, Nathan Kipner. "Go Away", in particular, is a strong song, exceptionally well performed in Dianne's distinctive soulful style. Now back in Toronto singing R&B-tinged jazz, the music with which she's now most comfortable, Dianne Brooks is in fine form -- watch and listen for her!
-Bill Munson, Toronto Blues Society (with thanks to Dianne Brooks, Jay Bruder, Steve Kennedy and Billy O'Connor)