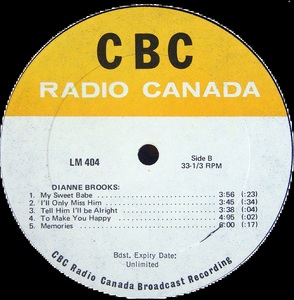 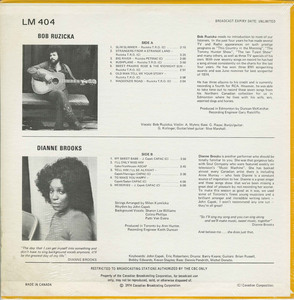 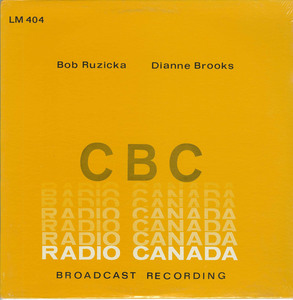 Dianne Brooks’ Sweet Serenade
[Gwendolyn] Dianne Brooks, was a jazz singer born and raised in New Jersey. She got her professional start in 1957 with The Three Playmates. With this group, Brooks recorded several songs in 1957 for Savoy and even wrote a few of them..

She moved to Toronto shortly thereafter in 1959, where she quickly became a fixture at The Bluenote and The Croq D'Or.

She started being hired for radio and TV work for both the CBC and CTV in 1960. This would prove to be a long-time source of work as she performed in the cast of many shows, as well as singing back up on many albums by some of Canada's top stars, including Keith Hampshire, Anne Murray and many more. In the mid-60's she joined The Soul Searchers, which also included Eric Mercury and future members of Motherlode, then joining Soul Company as part of the singing cast of "Music Machine."

In late 1966, she started to step out of the studios and try to make a name for herself. She toured throughout Canada and the eastern US. While on one of these excursions in the US, she caught the attention of Jerry Schoenbaum, owner of Verve/Folkway Records. He signed her to a short-lived deal, where she would release "In My Heart/I Just Don't Know What To Do With Myself" in February 1967.

Later that year, back in Toronto, she returned to studio work where she met Doug Riley (who would co-found Revolver records in 1968 and found Dr. Music). The two began working together in a relationship that would last years; with Riley writing songs for Dianne and featuring her music on his label: Revolver Records (Co-founded with Mort Ross and Terry Brown).

She signed a new deal with Tangerine Records leading to her most popular release, 1969s "Walkin' On My Mind/Need To Belong." Riley wrote both songs, with himself and Mort Ross producing. Both sides of the 45 got good airplay throughout the bigger markets and "Walkin' On My Mind" made the top 40 in some. The single was also released in the UK and Belgium on various indie labels.

The 1970's saw Dianne step into her biggest role yet. Her new deal with Revolver Records saw her record her first album. One that now fetches big bucks due to it's rarity, stellar musicianship, and a number of original songs written by Doug Riley and an uncredited Lenny Breau. Followed by extensive studio work as a backing vocalist, featuring some of her most prestigious roles, backing Rhonda Silver, Keith Hampshire, Anne Murray, and a stint with Doug Riley's Dr. Music band (a group she officially joined) and many others. After leaving Dr. Music in late 1971, not long after they released their debut, she returned to working in TV and radio jingles and on other artists' projects, including Pure Prairie League's 1972 album, BUSTIN' OUT, singing on "Leave My Heart Alone."

In 1974 she was commissioned by the CBC, along with Bob Ruzicka, to record an album for their LM-400 series; each artist got a side of the LP, with Bob's having 9 songs, mostly written by him, while Dianne's got 5 songs, written by John Capek. This album was for CBC radio use only and faded into obscurity shortly after it fell out of playing order. A great mixture of Country & Soul, Dianne's songs are especially fantastic!

During 1975, Dianne dabbled with being a touring background singer; touring with Bette Midler, Boz Scaggs, and Count Basie for a few years. She also appeared on vinyl for Anne Murray and Funkadelic.

1976 saw her snap-back with her next solo album "The Back Stairs Of My Life." Produced by Brian Ahern (of Arc/Yorkville production fame) and creating an amazing R&B meets disco vibe throughout the expertly chosen and performed songs. The first single "Kinky Love/Brown Skin Rose" managed to crack the top 40 throughout Canada and even got some airplay in the US.

Dianne was an example of an ace singer; Perfectly comfortable in all musical environments, with any type of accompaniment. She sung on hundreds of recordings for dozens of artists, and her many solo releases are excellent examples of Canadian Soul and R&B.
-Aaron Lusch
AaronLusch@hotmail.com