Formation and early albums
Ludlow and Reiner had performed together since 1973 in several Toronto-based groups. They joined guitarist Dave Allison and bassist Ian Dickson in 1978 and became known as Lips. Under that name, they independently released the album Hard ‘n’ Heavy in early 1981. Canadian independent record label Attic Records signed the band and re-released the album under the moniker Anvil. The release of Metal on Metal (1982) and Forged in Fire (1983), both produced by Chris Tsangarides, cemented the band’s position in the growing speed metal and thrash genres.

Touring success and influence
After performing in supporting roles for bands such as Iron Maiden and Girlschool during their Canadian tours, Anvil embarked on a world tour in 1982 that included a performance at the Monsters of Rock festival in the UK. The following year, the band continued to find worldwide success as it toured in Europe and Japan, including the UK Reading Festival headlined by Black Sabbath and Thin Lizzy, and opening on tour for Motorhead. Anvil returned to Japan in 1984 year for the Super Rock Festival where it shared the stage with Bon Jovi, the Michael Schenker Group, the Scorpions, and Whitesnake.

While the group was known originally for its sex-driven, shock-rock lyrics and unorthodox stage dress, Metal on Metal became recognized as a major musical influence on the “big four” thrash bands that would emerge in the coming years: Metallica, Slayer, Megadeth, and Anthrax. Reiner, a jazz-trained drummer, was among the earliest metal drummers to heavily incorporate the double-bass drumming technique.

Period of change and carrying on
Sensing the need of a more international presence, in 1983 Anvil enlisted the aid of former Aerosmith manager David Krebs and terminated its contract with Attic Records to pursue wider forms of distribution. However, Krebs had trouble marketing the band to other labels and ultimately dropped it. Anvil eventually signed with Metal Blade Records in 1987 and released Strength of Steel. Since Anvil’s last album, heavy metal had splintered into many subgenres and the band struggled to find its place. Pound for Pound (1988) and the live outing Past and Present (1989) were the final recordings to feature original guitarist Dave Allison.

With its peak in popularity behind it, Anvil produced a string of albums in the 1990s and early 2000s. Worth the Weight (1992) featured American guitarist Sebastian Marino, the only non-Canadian to perform in Anvil. Bassist Mike Duncan replaced Ian Dickson in 1993, while Ivan Hurd replaced Marino in 1995. Both Duncan and Hurd performed on Plugged in Permanent (1996), though Glenn Gyorffy replaced Duncan a short time later. Gyorffy and Hurd provided some stability to Anvil’s lineup as the band recorded Absolutely No Alternative (1997), Speed of Sound (1999), Plenty of Power (2001), Still Going Strong (2002) and Back to Basics (2004).

Documentary and resurgence
Though the band had always maintained a dedicated following with its rigorous commitment to touring, Anvil saw renewed fame in 2008 with the release of a highly-regarded documentary Anvil! The Story of Anvil. The film focused on the lives of the band members as they organized their biggest European tour since the 1980s and on their attempts to self-finance, record, and market their next album to record labels.

British screenwriter Sacha Gervasi, a roadie for Anvil in the 1980s, directed the documentary, which premiered at the Sundance Film Festival in 2008. The film received critical acclaim and won awards from several international film associations including the Los Angeles Film Festival, the Calgary International Film Festival, the Independent Spirit Awards and the Vancouver Film Critics Circle.

As chronicled in the documentary, former Anvil producer Chris Tsangarides reunited with the band for the recording of its album, This is Thirteen, which the band self-released in 2007. The recording received positive reviews and was regarded as one of Anvil’s better albums since the group’s high point in the 1980s. Coupled with exposure from the documentary, This is Thirteen revived success for the band and led to a tour and Anvil’s first network television appearance on “The Tonight Show with Conan O’Brien.”

Signed with The End Records, in 2012 Anvil released Juggernaut of Justice which was nominated for a Juno Award in the inaugural year for the category “Metal/Hard Music Album of the Year.” The album was the last to feature longtime bassist Glenn Five, who was replaced by Sal Italiano. In early 2013 Anvil announced the scheduled release of a new recording, Hope in Hell and another international tour.

Toronto, Canada's Anvil were one of the first North American bands to push the sound and style of the New Wave of British Heavy Metal one step further. Indebted to the likes of Judas Priest, Iron Maiden, and many others from across the Atlantic, Anvil nonetheless played louder, faster, and heavier than their heroes, in the process laying the groundwork for the thrash movement that took over heavy metal's underground in the '80s. Anvil's second and third albums, Metal on Metal and Forged in Fire, made significant waves in the metal community in 1982 and 1983, but despite the respect of musicians and metalheads alike, stardom was not to be theirs. Geographic isolation, label and management difficulties, and shifting musical trends all conspired against them, leaving them largely the province of cultists and collectors just a few short years later. Undaunted, Anvil soldiered on, continuing to record and tour whenever possible. In 2009, a documentary film by the band's former teenage roadie helped break them to the broader audience they never found in their prime. The tenacious metallers issued their 19th studio album, Impact Is Imminent, in 2022.

Anvil were formed in Toronto in 1978 by childhood friends Steve "Lips" Kudlow (vocals/guitar) and Robb Reiner (drums). They had been playing music together since their teens. Initially known as Lips, the band added bassist Ian Dickson and rhythm guitarist Dave Allison, and in 1980 recorded an independent album titled Hard 'n' Heavy, which introduced their penchant for sexual explicitness. Zany antics notwithstanding, Anvil's musical contributions were very real; their fastest songs were some of the earliest speed metal laid to wax, while jazz-trained drummer Robb Reiner set new technical standards for the genre, including pioneering the double bass drum technique that's become a staple of much extreme metal since. Upon signing to the Canadian independent label Attic Records, the band changed its name to Anvil, and reissued Hard 'n' Heavy with an updated cover in 1981. Their groundbreaking second album, Metal on Metal, adopted a much faster, heavier style, and took the metal underground by storm. Anvil snagged opening slots on tours with the likes of Iron Maiden and Motörhead, among others, and played significant festival dates in Japan and England. The 1983 follow-up, Forged in Fire, refined Anvil's signature sound while adding more musical variety, and furthered their growing following.

Anvil's success stopped right there, though. Seeking a better stateside deal, the band's manager asked Attic to release them from their contract, but a new label offer never materialized. While the band hung in limbo, heavy metal exploded -- a wave of hook-heavy pop-metal bands conquered the mainstream, while avowed Anvil fans like Metallica, Slayer, and Anthrax (the latter of which started out playing Anvil covers) catapulted the genre into new realms of heaviness, far beyond anything Anvil had ever recorded. Attic issued a collection of hits and outtakes called Backwaxed in 1985, but the official follow-up to Forged in Fire, Strength of Steel, wasn't released until four years later in 1987, when the band licensed it to Metal Blade. Creatively disappointing, Strength of Steel effectively killed what little momentum Anvil had left. They recovered somewhat on 1988's heavier Pound for Pound, which featured trademark sex songs like "Safe Sex" and "Toe Jam," as well as the hockey anthem "Blood on the Ice," but it was too late. Dave Allison left the band in 1989, and was replaced by Sebastian Marino, but not before the release of that year's Past & Present: Live in Concert.

Marino's only album with Anvil was 1991's Worth the Weight, a darker, thrashier outing than anything they'd previously done. It, too, failed to catch on, and was followed by a lengthy recording drought. Ian Dickson called it quits in 1993, replaced by Mike Duncan; Marino left to join Overkill in 1995 and was replaced by Ivan Hurd, while Duncan departed a year later in favor of new bassist Glenn Five. Thus reconstituted, Anvil signed with Canadian indie Hypnotic Records and issued the comeback album Plugged in Permanent in 1996, which continued the heavy, serious direction of its predecessor. Released in 1997, Absolutely No Alternative returned to the band's tradition of sex songs with offerings like "Show Me Your Tits" and "Hair Pie." Speed of Sound appeared in 1999 and found Reiner experimenting with the blastbeat technique for which he'd helped lay the groundwork. However, the band went with a somewhat lighter, more classic metal style for its next several albums, 2001's Plenty of Power (which featured a tribute to "Pro Wrestling"), 2002's Still Going Strong, and 2004's Back to Basics.

In 2005, Anvil were contacted by a former roadie, Sacha Gervasi, whom they'd met as a teenager while touring England. Gervasi had grown up to become a screenwriter, most notably penning the Steven Spielberg-directed The Terminal, and wanted to film a documentary about his old friends. The result, Anvil! The Story of Anvil, chronicled Anvil's efforts to tour Europe and to record their 13th album, aptly titled This Is Thirteen, which reunited them with their early-'80s producer Chris Tsangarides. Without a label, Anvil opted to maximize profits by selling the album through their own website. Following Hurd's exit from the band, the film became a hit on the festival circuit in 2008, and was released in the U.K. in February 2009. Within two months, it became the highest-grossing rock documentary in U.K. history, and was quickly snapped up by VH1 for American distribution. Anvil! The Story of Anvil was released in the U.S. to glowing reviews in April 2009, and the band supported it with live gigs at a series of screenings around the country. In 2010 a remastered, re-release of 1989's Past & Present arrived on Roadrunner, followed in 2011 by Juggernaut of Justice. After nearly 35 years of rockin', the band's 15th album, Hope in Hell, arrived in 2013. In 2016, Anvil unleashed a new slab, confidently titled Anvil Is Anvil. The album was recorded in Germany with producer Martin "Mattes" Pfeiffer, and featured new bassist Chris Robertson. The band returned just two years later with their second record to feature Robertson on bass. Pounding the Pavement was once again recorded in Germany, but this time with Jörg Uken (God Dethroned, Dew-Scented). For their 18th album, Anvil once again returned to Soundlodge Studios in Germany with Uken and Pfeiffer mixing and producing. The resulting album, Legal at Last, was issued at the beginning of 2020 by AFM Records. Two years later, the band issued their 19th long-player, Impact Is Imminent.

Past and Present Live in Concert 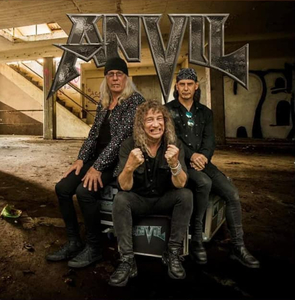