SonReal is the moniker of Canadian singer, songwriter, rapper and visual artist Aaron Hoffman. With years of international touring, more than a dozen award nominations, over 75M YouTube views and over 100M audio streams to his credit, Aaron has made a name for himself as SonReal.

But there is more to SonReal. His musical and creative journey began as a young rapper based in Vernon, BC playing nearly empty bars to friends. Undeterred, he moved to Vancouver and the now infamous 1851 House, where he found himself immersed with creatives — friends with dreams just as big as his, in lanes all their own. An aspiring DJ. An aspiring videographer and filmmaker. An aspiring music industry executive. All under one roof, and all realizing they had complementary skills and ambitions. It was here that the SonReal project truly came to life, supported by friends and partners who still ride together to this day.

What grew from there was one of the most unique collective projects to emerge from the Canadian underground in some time. Bursting on to the scene with the quirky, now-viral video sensation “Everywhere We Go” (22M views), SonReal and his team set a high bar for visual content and songwriting. EPs and mixtapes followed suit, featuring songs and next-level videos like “Preach” and “For The Town” before SonReal’s full-length debut in 2017, One Long Dream.

What has become obvious as you look back on SonReal’s career is that he has never been comfortable being placed inside a box. Often told that his versatility and genre-bending tendencies are an obstacle, SonReal has always stayed true. Constantly pushing boundaries in his music and in his visuals, he has always aspired for more. Tracks like the Platinum-certified single “Can I Get A Witness” and “Problems” from One Long Dream were the first indication that SonReal had more to say as a songwriter, and more to accomplish as an artist.

The Aaron LP is the culmination of this creative journey to align the artist persona of SonReal with the songwriter and person, Aaron Hoffman. First and foremost, the album is a collection of honest songs. Co-produced in LA by Trevor Muzzy, the songs are lush, deliberate and expansive. Hoffman and Muzzy poured over every detail together over a four-month period, ensuring that this album would be SonReal’s masterwork. Whether its folk-tinged acoustic ballads like the album opener “Fearless” and “1000 Highways”, the soul-infused tracks “Healing” (ft. Jessie Reyez) and “Quit”, or the intensely personal joints “Voicemail” and “Ted”, every song is a deeply relatable look into the person behind the music - Aaron Hoffman. Of course, he still has bars as evidenced by tracks like “Parachute”, “Dive Bar” and the album closer “Back To You” — but those bars now support a broader, more ambitious creative endeavour.

SonReal’s versatility is no longer an obstacle – The Aaron LP will see daylight in a musical climate that applauds musical and creative flexibility, where previously stark genre lines have been blurred by the biggest artists in the world. It just turns out that as he always has been, SonReal was once again ahead of the curve.

Nobody's Happy All the Time

Nobody's Happy All the Time 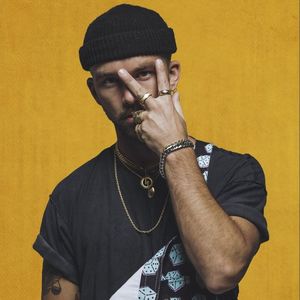