Who is Joe Thrasher?

Joe Thrasher is more than a metal band. That guy banging his head in his basement bedroom? He's Joe Thrasher. That girl who is five feet tall and 100 pounds but decides to start the mosh pit? She's Joe Thrasher.

As a band, Ottawa-area-based Joe Thrasher brings those thrashers together in a mix of harddriving metal-glorifying songs and tunes that, while still driving hard, showcase the band's thoughts on everything from war to the decay of society. A mix of thrash, NWOBHM, hard rock and speed metal, Joe Thrasher is an old-school metal feast that appeals to everyone from the traditional metalhead to more modern metal-based fans.

While it all seems fitting with the current events and worldwide decay, the overall meaning of Cries of War – the song and the album – is of light coming out of the dark. The song itself also deals with getting back to more primitive times, and how our western world has become a “weakened society” through our reliance on our own “creations of ease”. The artwork of Joe Petagno showing a total state of chaos is a true feast for the eyes. Amongst the mayhem comes “Joe Thrasher,” the light from the dark. But will we have to meet the ultimate end for this to happen? Other songs, such as “Life Erodes,” “We Are The Ones” and “This is a Test” deal with life in general – trying times, growing old, questioning the world. While touching on negative issues, the tracks always bring a positive feeling to listeners. There are also songs like “Out for Blood,” “Metal 'till You Puke,” “Leatherhead” and “Canadian Metal” that continue the Joe Thrasher tradition of pit-based, headbanging, out-of-control, raise-yourfist-and-scream MAYHEM. These are true metal scorchers. Cries Of War is bound to be a classic metal album. 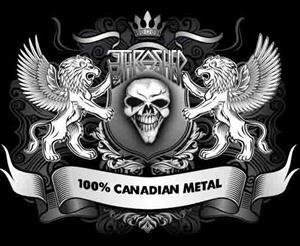