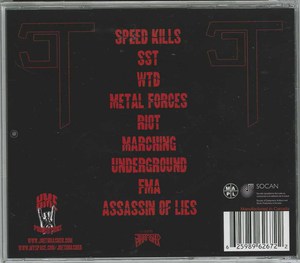 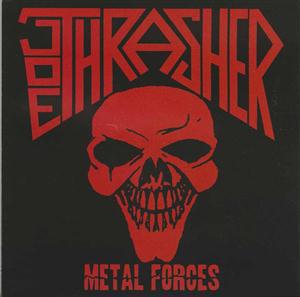 At last! Some 6 years after their formation, Joe Thrasher's debut is finally here. Until now I had to quench my thirst with their demo and the occasional local show. Well, it was worth the wait. Joe Thrasher don't fuck around: They formed the band with the admitted goal of having fun thrashing, and that's what Metal Forces is all about – hell, the title alone is a good indicator that this is not another social commentary-infested Thrash album – if you want the news, tune in to CNN. This is all about kicking your ass and making you smile during the whole ordeal.

100% gimmick-free Thrash is what's offered on Metal Force - pretty "straightforward" stuff, full-speed ahead from beginning to end. Interestingly, save for the occasional tiny hint of mid-80s Bay Area Thrash, I found myself unable to compare most of this stuff to anything else (whether that's real, or whether I'm just lost in the sea of Thrash in my collection is another story.) Their vocalist has a throaty/raucous voice that may take some getting used to for some, though for me it clicked right away. On the first few listens I was thinking a little bit of Overkill, but with a lower-pitched voice. Sometimes the vocal lines can sound a little "monotonous" for a bit, only to suddenly hit you with an insane scream worthy of the best 80s screamers – throws me off every time! On "SST", some of the screams even remind me a little of King Diamond.

Musically, well, as mentioned previous there's no gimmick here: This is all in-your-face, I'll-make-you-my-bitch Thrash. The music isn't overloaded, which – to me at least – makes appreciating the various instruments much easier. Unrelenting classic metallic riffage through and through, only interrupted on occasion by Matt's solos – some of which can practically lift you off your feet by the coolness factor alone – and sometimes it's just the pounding drums that take over, some major speaker rattling that'll pin you to the ground until you say you're sorry (er… OK, I've been thinking about my school bullies from 30 years ago lately… *cough*)

Not much to complain about here. The album is an independent release and the sound is a little low compared to, hmmm.. well, most of what I have on my playlist lately. It's not a bad sound – but it does have that little DIY feel to it – they got the instruments to sound clear and that's the most important part. At just under 27 minutes, the album is really on the short side, but better that than 50 minutes containing 20 minutes of fillers. All songs kick some serious ass, though I'm partial to "Underground" – the music is fine, but the word "underground" is repeated so often that it drives me fucking nuts (not to the point of skipping the song, however.) Tracks such as "Speed Kills", "Metal Forces" and "Marching" (a fucking poser-crushing hymn that has the potential of a live favourite – cool as hell) more than make up for these little details. If you're looking for some speedy, ass-kicking and unpretentious Thrash, then you can't go wrong with Metal Forces.
http://www.metalcrypt.com/pages/review.php?revid=5143

I didn’t need my little brain to find out what kind of Music Joe Thrasher delivers. Thrash? Of course! Nevertheless the first notes, from a song called “Speed Kills” are more mid tempo. In this opening track Scott Wark and his other band mates are gearing the tempo up once and a while, without making this song sound super fast. Who is Joe Thrasher anyway? For sure it ain’t a band member, so the band’s name can be considered as a pretty original one. Time to dig into the history of this Canadian band….

History? Not that much to find about these three lads. On their myspace.com page there isn’t a biography available and their official website is under construction, damn! Yes, I really mean ‘damn’ because this kind of music is very enjoyable if you’re into Eighties Metal. Joe Thrasher can be compared with a mix between Annihilator, Overkill, Exciter at the one side and some US Power and Bay Area Thrash Metal bands with raw vocals on the other (think Metal Church and Exodus). Faster pieces are available but at the end this band decided to play some kind of hard hitting Heavy Metal with major thrashy riffs and arrangements.

Scott Wark has a very cool voice. At the one hand his vocal sound is raw and violent, in vein of Steve Sousa (Exodus) and David Wayne (RIP), on the other hand he delivers some great screams. His aggressive approach is present all over the album and his voice fits perfect at this kind of music, hammering in your mind from the beginning until the end. I’d really want to hear this guy sing on the higher notes more often!

Don’t expect high technical arrangements, instead you should be prepared for sharp and catchy riffs, some outstanding powerful and energetic Thrashy music sessions and tracks that will break your neck in a few seconds. Thanks to the fast fingered and screaming guitar solos Joe Thrasher sounds very reliable in what they’re doing. Tracks like “SST”, “Riot” and “Marching” are really great Thrash Metal songs where the bands seems to combine melody, power and raw aggression. And yes, some solos are pretty spectacular because of the way the strings are pulled! My favorite track is without any doubts “WTD” (Waking the dead).

In times where Thrash is successful again Joe Thrasher delivers an album that might receive the attention of some labels. Not that this is the modern kind of Thrash the youth is longing for but it’s great to hear a band that uses mid tempo Thrash Metal songs to please the listeners. I always liked this kind of bands.
http://users.telenet.be/metaltoinfinity/JoethrashercdreviewMetalforces.htm