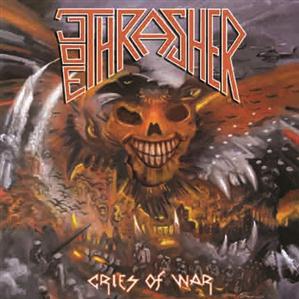 The 3-track teaser for this album was quite... the tease (duh), so I was really looking forward to finally getting the whole thing. Once again Joe Thrasher keep it short and in-your-face, the album clocking in at 30 minutes of face-smashing thrashing numbers. From the get go one just has to notice the production, which is several steps up from 2009's Metal Forces (great songs, held back a little by said production.) This is "signed band"-level production right there – clear, heavy, and just abrasive enough for Thrash.

Simply put, Cries of War is a lot of fun. Most songs are straightforward but damn well played, speedy thrashers that just rip through the speakers, the kind of songs that you just can't ignore – you'll either sing along, headbang, raise your fist, at least tap your foot, or any combination of the above. This makes for really bad background music, let me tell you. :)

Lots of short (1:35 to 3:00) songs like that, but don't let the short lengths fool you, for even the shortest song has a lot going on if you pay close enough attention – they'll still get you from slow, melodic passages all the way to machine-gun style riffage and some motherfucking pounding drums. On vocals, Scott shows that he's quite the versatile singer, ranging from melodious, clean, "quiet" vocals all the way to raucous, thrashy fast vocals that I'd say are pretty much his trademark.

"We Are the Ones" was on the 3-track teaser, and it's on its way to becoming my favourite Joe Thrasher song. At 5:31, it is the longest song here and what makes it so great is how diverse it is. It's anthemic, catchy, emotional, aggressive, fun and at times even sounds a little bit solemn. It's a thrasher alright, but it has a strong Power/Thrash vibe that just wakes up all your senses and it's pretty much impossible not to stop everything you're doing when the song comes on. If I had this album on cassette, the tape would probably have broken already from me rewinding and replaying the song from 3:06 to 4:20 repeatedly. I fucking love that passage.

Not one bad song on this, and I resisted the temptation to rate it higher if only to give the guys room to impress me even more with the next album (no pressure *cough*). With Thrash being "the big thing" these past few years, it's amazing – no, frustrating – that a label has yet to pick these guys up. Thankfully that hasn't stopped them from raping our eardrums. Looking forward to album number three... ;)
-Michael Renaud
http://www.metalcrypt.com/pages/reviews.php?revid=7269