Amanda Rheaume returns to her folk roots with the summer release of “Light of Another Day” Amanda has been on a blistering pace for the past two years. She’s toured Canada and the United States extensively. She’s performed for Canadian troops in Afghanistan, Dubai and Alert, Nunavut. Amanda was to perform at the Canadian Embassy in Honduras but spent Canada Day holed up inside a hotel room when President Manuel Zelaya was forced into exile after the country's military seized control in a political coup.

"Light of Another Day" is an acoustic-based LP, focused on positive energy and moving forward. Themes of hope, community and new beginnings are reflected in the lyrics of songs that are stripped-down in a way that Amanda describes as coming full circle as she really finds her sound and writing style again.

Highly regarded by her peers, Amanda Rheaume has dedicated herself as a key performer in Babes for Breasts since its inception and has helped raise thousands of dollars to help fight breast cancer across Canada. Her Acoustic Christmas album sold 6300 copies and raised more than $30,000 for the Boys and Girls Club of Ottawa.

If you’ve been to major music events like SXSW in Austin, Texas, CMW and NXNW or Ottawa Bluesfest, you’ve probably seen her. If you’re fans of the Sadies, Doc Walker, or K'Naan, Jeff Beck and The Black Keys, you’re probably aware she has opened for them. And in between all that she has managed to co-write music with Holly McNarland, Chantal Kreviazuk, Jeff Pearce, and Brian Byrne. A lot of this activity began just two years ago with the EP release, “Kiss Me Back” recorded by Jeff Dawson in Vancouver.

The experiences of life on the road and performing on major stages help craft the words on “Light of Another Day” but Amanda can’t write on the road. The title is a line from the song Push On, which is a story about the soldiers in Afghanistan and their families back home. She told a reporter recently, “I remember feeling like I just wanted to purge all of these pent up repressed or lingering feelings/demons and then I also remember feeling like I wanted to write about hope and positivity because that is what I felt in my heart from touring and doing what I really love to do - playing music for a living. In my travels and own life experiences over the last two years I've witnessed such strength and resilience in the human spirit. Times are tough, there are bad things happening all over the world, things we can't control yet no matter what we have to push on and stick together and find the light of another day. The whole record has themes of hope, community and new beginnings and I wanted to portray that in the title.”

A release of the album to radio stations across Canada will coincide with tours to both the East and West Coast of Canada and the US in early 2012.

Amanda Rheaume’s musical journey has taken her to Lilith Fair, alongside Sarah McLachlan, the Dixie Chicks, Indigo Girls and Sheryl Crow. Her music has spanned the musical landscape of rock, pop, folk, and roots. She has returned to her roots and what makes all this extraordinary is that “Light of Another Day” is Amanda Rheaume’s first full length album. The next two years hold the prospect of many positive adventures ahead.

In September, 2011 Amanda Rheaume, was named one of the top 25 people in Ottawa. "While Amanda Rheaume’s musical career alone is enough to put her in Ottawa’s Top 25, the combination of her musical talent and philanthropy makes her a real star. Musically, Amanda has been on the stage of major music events and has opened for many famous acts. She’s even collaborated with some of the industry’s top names including co-writing music with Holly McNarland, Chantal Kreviazuk, Jeff Pearce and Brian Byme. For the past two years, she has toured Canada and the United States as well as performed for Canadian troops in Afghanistan, Dubai and Nunavut. While her music is an eclectic mix of rock and pop, her new album, released this past June and called Light of Another Day, is a return to her folk roots. Rheaume has a big heart. She has raised funds for charities in her hometown here in Ottawa. For the Boys and Girls Club of Ottawa, she has raised over $30,000.She has been heavily involved in Babes for Breasts, a cause dedicated to helping fight breast cancer across Canada, raising thousands of dollars."

If You Never Leave 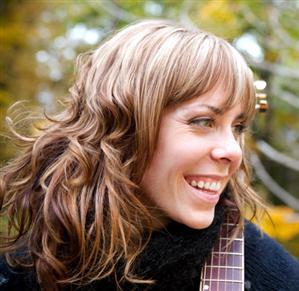