Rheaume, Amanda - Light of Another Day 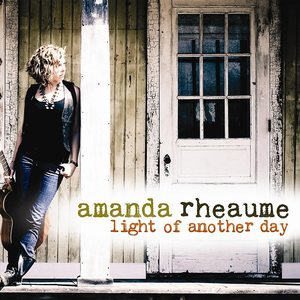 Amanda Rheaume knew music was her calling by the time she was 16 years old.

Granted, sharing the stage with the Indigo Girls, Sheryl Crow and Sarah McLachlan during the 1999 incarnation of Lilith Fair may have influenced her decision.

“That was the thing that catapulted me into knowing this was what I wanted to do,” says Rheaume, whose aunt was a production coordinator on the tour.

“I met a whole bunch of the ladies backstage (at Toronto’s Molson Amphitheatre.) It was such a community built show. Everyone played on everyone else's stuff and they were really open in saying, 'Why don't you come out and sing a tune with us?’ That feeling of being on stage with them and performing in front of so many people, it was amazing.”

The Ottawa singer-songwriter is currently on the road with her debut album, Light of Another Day.

The acoustic folk/country CD is the culmination of more than a decade of working on her songwriting skills and coming to terms with a singing voice she wasn’t fully comfortable with.

She says releasing four EPs and honing her performing chops before recording a full-length album also allowed her pinpoint exactly what she wanted to present to audiences on her debut.

“I'm kind of grateful for that, because I learned so much over the years,” says Rheaume, who performs Friday at the Ironwood Stage in Inglewood.

“I can't imagine going into the studio for the very first time and doing a full record.

I just had a lot of perspective and experience in a lot of studios already. It's a lot easier to make better decisions for yourself.”

Another reason it’s taken Rheaume so long to release a full-length is simple finances. But after winning a $40,000 Ottawa radio contest in 2008, Rheaume had enough backing to take the time and use the resources she needed to make the album she wanted.

But music hasn’t been a completely smooth road for Rheaume, who admits she’s been discouraged more than a few times along the way.

She addressed those feelings on a couple of Light of Another Day tracks, specifically the pretty country-tinged Better Days Ahead, which she wrote for her touring musician friends.

“It’s about how things can get really hard and you will ask yourself, ‘Why am I doing this? I must be insane,’” she says.

“I'm thinking that less and less these days.”

Despite the ups and downs that come with being a touring musician, Rheaume knows she has plenty to be thankful for – Especially visiting Afghanistan twice in recent years.

“This last time I went it was a big celebration,” says Rheaume, who performed for Canadian troops in July alongside Rick Mercer and Mike ‘Bubbles’ Smith.

“But one of the first things they said when we got there is that they were getting rocket attacks almost every day. You’re like, ‘Oh yeah, people are bombing each other here.'

There was some freaky stuff for sure.”
-Lisa Wilton, Calgary Sun