As a bassist and back-up singer for well-known Québécois acts (Mara Tremblay, Karkwa, Ariane Moffatt, Steffie Shock and Edith Butler) Marie-Pierre Arthur was already turning heads. With her lush voice, her chops on the Höfner, and her slightly spaced-out vibe, it was clear that this girl from Grande-Vallée in the Gaspé peninsula was much more than a supporting player. She was fired up. She found the prospect of recording her own album intoxicating, welcoming all the challenges that came with it: I just couldn’t ignore the idea any more, she confides. The little flashes of inspiration I had at the start became an obsession. For a while, I felt like a prisoner of my obsession, because I didn’t know what route to take.There was no route, per se. The only thing for her to do was to look straight ahead, take a deep breath and dive into the unknown.

And so it is that in the dead of winter, 2009, a pretty brunette with a clear voice landed smack in the middle of Québec’s musical landscape – in her hands, as an offering, a bunch of folk songs. The songs would go on to earn her a string of accolades: Three ADISQ nominations (Discovery of the Year, Popular Song (Pourquoi), Contemporary Folk Album), a nod at the Indie Music Awards for Best Francophone Album, and spots on year-end best of lists in Le Devoir, La Presse and Rue Frontenac. Radio-Canada named her one of their discoveries of 2009-2010. Moreover, she received the André "Dédé" Fortin Prize from the SPACQ and the Chanson populaire prize from the SOCAN and she was nominated by the ADISQ for Show of the year, as well as finalist at the Grand Prix de la relève Archambault 2010. She honed live show – often sold-out – by touring throughout Québec, Ontario and France.

But who exactly is Marie-Pierre Arthur? There’s no straightforward answer: a unique talent, a seasoned musician, a woman on familiar terms with her personal demons. She writes of the delicate workings of the heart, of the need to stay truthful, of the desire and the courage required to investigate the root of one’s dark impulses. I ask myself so many questions. My songs are laced with them, she says. Her vibe, at once delicate and earthy, draws comparisons to Cat Power, Emily Haines and Eleni Mandell. It was important to me that the lyrics be grand and large, so that you could invent a story yourself by catching just a few words. I’m not a fan of lyrics that take you directly to a specific place, that don’t give you room to fly around inside your own head... And the songs won’t bring you down, because the music itself is really joyful.

It’s music that reflects her journey so far: intimate folk with country accents, North-Americana that resonates with warm bass tones, songs that rock out at times with the help of the guys from Karkwa (Louis-Jean Cormier, and François Lafontaine, who co-produced the album with Marie-Pierre) and Olivier Langevin. Add Robbie Kuster on drums (Patrick Watson) and French expat/artist Gaële as co-lyricist, and you get a rich and layered album – a companion piece to autumn days, road trips along country roads and full-moon nights.

Impressively, Marie-Pierre did her last tour as an expectant mother. The baby was born in June 2010, and the tireless musician is back on the road since the fall – in Europe and Canada. The adventure is nowhere near over: All of this is only a beginning, she says, eyes lighting up. 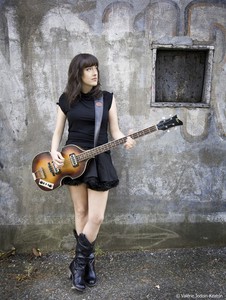 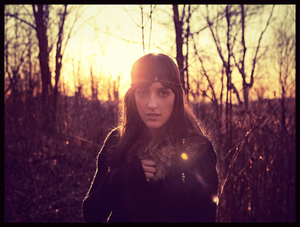 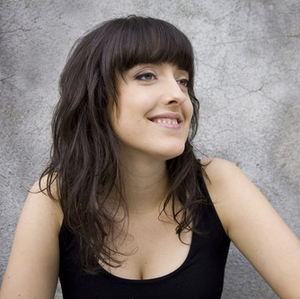