Due to the overwhelming welcome they have received across Canada, Pied Pumkin is no longer "reunioning" but have officially "returned" and will continue to play and record together on an ongoing basis.

The Pumkin usually tours once a year as all three are enjoying extensive solo success. JOE MOCK lives in France and has been performing in Europe. He released the "Jozu" CD from his adventures in Tokyo and recently "Capgun Cowboy". SHARI ULRICH gives concerts and songwriting workshops and produces the Bluebird North
singer/songwriter series. Her latest solo CD is THE VIEW FROM HERE. RICK SCOTT's dulcimer lullabyCD, SNOOZE MUSIC, was nominated for a 2007 Juno Award and won NAPPA Gold, Parents' Choice Silver Honor and Parenting Awards in the US.

Joe Mock:
Joe Mock started playing folk music in the 60's while in college. With a handful of chords, a sense of rhythm, an inherited love of music and some fine friends, a trio was formed to sing the popular folk songs of the day. Following this came The Dusty Rhodes Trio with Dennis Rhodes and Bill Gilchrist, that was formed while at Gonzaga U in Spokane Washington. With the help of an agent named Dave Sobel, the group soon had valid reason to escape dorm curfew. In the summer of that year they managed to perform at the Hungry I in San Francisco thanks to the misfortune of the featured artist, Dick Gregory who landed in jail due to conscientious objections to the Vietnam war. Vancouver's 'Bunkhouse' was the next venue to seed the future. He was in a duo with Steven Barrett and later as a solo, in a "Folk Competition" - he won an electric Gibson Guitar. Memories of the Bunkhouse in Vancouver include meeting Sonny Terry and Brownie McGee, Josh White, Jose Feliciano, Brent Titcomb, David Wiffen, Gary Fjelgard and where Pat Paulson hung himself upside down from the marquee and painted the street with his beard but still did not get elected President of the US . . they were all hanging out. . .and big John York would sing Darcy Farrow as natural as a David Wilkie can say crik for creek. . .)

Shari Ulrich:
Sharon (Shari) Ulrich, (born 17 October 1951) is a Canadian musician-songwriter. She has won a Juno Award for "Most Promising Female Vocalist of the Year", and has acted as a television host.

Born in San Rafael, California, Ulrich moved to British Columbia in the early 1970s. With Rick Scott and Joe Mock, she created the Pied Pumkin String Ensemble, which first performed in 1973. Her break came when she was hired to tour with Valdy and his Hometown Band. Shortly afterward, she won a 1982 Juno Award for "Most Promising Female Vocalist" and received Juno nominations in the following two years for "Best Female Vocalist".

Ulrich has also written items for Sesame Street and composed theme music for several networks, including the CBC.

Ulrich continues to perform solo (often accompanied by daughter Julia Graff) and to occasionally tour with the Pied Pumkin. She is also a member of the folk music group UHF. She lives on Bowen Island, British Columbia.

In 2009, Ulrich joined Barney Bentall and Tom Taylor to release the album "Live" at Cates Hill.

For six years they made folks laugh, cry, dance and sing along. They released three albums.They represented Canada at the 1982 Knoxville Worlds' Fair.

Then they each went on to explore other creative interests: Joe to make music in Japan and France, and Rick to nine countries as an actor, singer/songwriter and acclaimed family entertainer.

Pied Who Pear What

No. 5 Orange b/w Middle Of Nowhere

David In The World 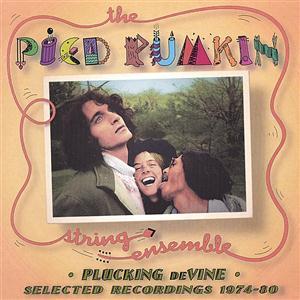