A Passing Fancy were a popular Toronto band from the mid-1960s fronted by singer/songwriter and guitarist Jay Telfer, today publisher and editor of the antique collector's magazine Wayback Times, and Dr. Brian Price president of In The Game Hockey Cards.

Early years:
At Downsview Secondary School, Brian Price (organ, vocals) formed his own band, the Dimensions with brothers Jay (rhythm guitar) and Ian Telfer (bass guitar), Phil Seon (guitar) and Greg Hershoff (drums) in July 1965, The Dimensions were managed by Bernie Finkelstein, (future president of True North Records and Bruce Cockburn's longstanding manager), who had also been a student at Downsview. The Dimensions were the house band at Cafe El Patio in the Yorkville Village. The band changed name to A Passing Fancy in January 1966 when Finkelstein left to take over the management of The Paupers.

By this stage, Rick Mann (aka Fruchtman) had replaced Jay's brother on bass. The new line-up began to gig extensively on the local scene and in high schools across southern Ontario. Through the band's fan club president, Barb Young, A Passing Fancy was introduced to record storeowner Walter Honsberger and partner Dan Bartollini, who began to shape the band's sound and image as Wal-Dan Management. Within a few months, the management team had wrangled a three-single deal with Columbia Records.

In September 1966, Steve Wilson came in to replace Greg Hershoff on the drums. Aside from playing regularly at clubs like the Night Owl, the Gogue Inn and Club 888, A Passing Fancy also worked extensively at the Blue Fox and established a local following throughout late 1966 and early 1967.

Singles success and playing Expo:
The band's debut single, Telfer's “I’m Losing Tonight”, released in February 1967, reached #22 on the CHUM chart the following month. While its follow up, “You’re Going Out Of Your Mind” only made #37 in June, the group's third single for Columbia, “I Believe in Sunshine” restored some faith by reaching #28 in September. By then, Steve Wilson had left and Louis Pratile joined on drums.

During the summer of 1967, A Passing Fancy played at Expo ’67 in Montreal where they jammed with local band, Les Tetes Blanches. The moderate success of the singles, prompted Columbia to finance a fourth single, “People In Me”, was listed at #48 and failed to chart anymore when it was released in December.

Telfer's demanding need to practice was met with little enthusiasm by Price who was completing his third year in university and wanted to pursue a career in dentistry. In March 1968, Price quit. A Passing Fancy carried on by adding Fergus Hambleton on organ and vocals and Brian Smith who contributed a third folky guitar.

After shooting at the CBC, playing the first Let's Go TV show in colour and performing that same night at the Granite club, Telfer was told by the Wal-Dan management that he would no longer be in the group. Unhappy over the new direction Seon and Mann left shortly thereafter. A few months later, in June 1968, the remaining members of the band also left.

The new line up recorded four tracks, which the management took to John Irvine of Boo Records. Irvine helped piece together an album's worth of material and released a lone single, “Your Trip”, but it sold poorly.

The self-titled album, which featured all of the Columbia singles, (including an alternate mix of “I’m Losing Tonight” with no lead guitar) was released in November 1968. Like the single, the album failed to make an impression despite the band holding down a residency at the El Patio throughout the latter part of 1968 and early 1969. By June 1969, the band had broken up.

Aftermath:
Original member and guiding light, Jay Telfer went on to perform and record as a solo artist. In the spring of 1969, he recorded an unreleased album for Bernie Finkelstein with contributions from Kensington Market members Keith McKie, John Mills Cockell and Alex Darou; Malcolm Tomlinson and Louis McKelvey from Milkwood; Murray McLauchlan and Kevin Staples, who later found fame with Rough Trade.

Staples also played guitar on an album that Telfer and Fergus Hambleton recorded together for Allied Records called “Come Together” as Goody Two Shoes. Telfer resumed a solo career and recorded a string of singles and a 1974 album, "Time Has Tied Me" for Axe Records in 1973-1974. On that album, Jay brought back Murray McLauchlan, Malcolm Tomlinson, Fred Mollin, Rick Mann, Fergus Hambleton and Kevin Staples. In 1975, Jay Telfer moved to LA to marry and quickly divorce Bonnie Bedelia and later became a script writer for Cannon Films, which included 1977's Kid Vengeance, starring Jim Brown, Lee Van Cleef and Leif Garrett. In Toronto in 1979, Telfer wrote You've Come a Long Way, Katie a three hour piece on cross-addiction for CBC.

Brian Price graduated dentistry and in 1980 founded Tridont Dental Centres opening 107 dental offices under the Tridont name from coast to coast across Canada. In 1990 Price left the health care industry and created Parkhurst Products Inc. a hockey card manufacturer. Currently, he owns In The Game, Inc. a sports card and memorabilia manufacturing company.

Hambleton also went solo and later played with the bands Rain and The Basics and with reggae act The Sattalites. Final A Passing Fancy drummer, Wally Cameron was briefly involved with Leigh Ashford.

Rick Mann changed his name back to Richard Fruchtman and played with Whiskey Howl, another successful Canadian band, from 1970 to 1973.He then free-lanced and played with the likes of Dan Aykroyd, Gilda Radner, Paul Shaffer, Doug Henning, The Diamonds, Doug Kershaw, Dan Hill, Richard Newell (aka King Biscuit Boy), Tony Kosinec, String Band. He now works at Long & Mcquade, a Canadian music chain, and plays cocktail piano whenever he can.

A Passing Fancy reunited for a one-off date in Toronto's Yorkville village in 1988.

I Believe in Sunshine b/w She Phoned

You're Going Out of My Mind b/w Sounds Silly

People in Me b/w Spread Out 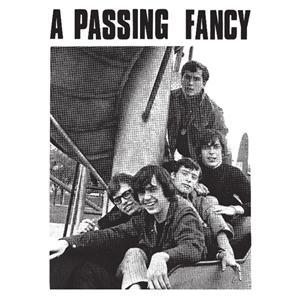