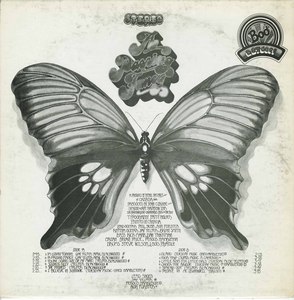 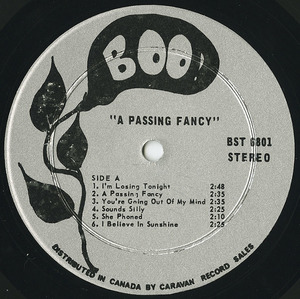 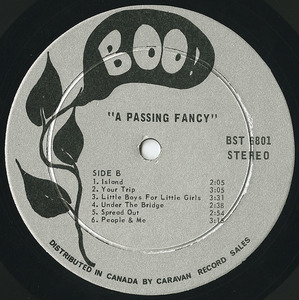 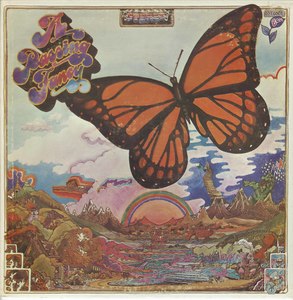 Originally known as The Dimensions, A Passing Fancy sprang up in Toronto's Yorkville Village in 1966. After a few shows in the Village, record store owner Walter Honsberger and partner Dan Bartollini began shaping the band's sound and image, eventually bringing them to the doorstep of Columbia Records, where they were signed to a standard six-sides contract (i.e. three singles).

They played at Expo '67 where they jammed in a cultural exchange with Montreal band Les Tetes Blanches. Their popularity grew first with successful touring throughout Ontario and then out to Eastern Canada where radio also embraced them. Jay Telfer was the band's songwriter (and later composed "Ten Pound Note" for Steel River) who collaborated with Errol Blackwood for their first Columbia single "I'm Losing You Tonight" in February 1967 which reached #22 on the charts by March.

The second single, "You're Going Out Of Your Mind", only reached #37 in June 1967, they bounced back with the successful "I Believe In Sunshine" in August which had a short four week run at the charts, but reached #28 in September of that year.

Columbia continued with one more single in early 1968 ("People In Me") but without any chart action they weren't confident enough to invest in a full-length record. In response, Honsberger and Bartollini formed their own Boo Records to put together an album's worth of material. The band's line-up fluctuated in the meantime which would be reflected on the additional tracks for the 1968 self-titled release. The album would feature the Columbia singles (with an altered mix of "People In Me"). Boo Records attempted to squeeze a little more life out of the record in June 1968 with a new song - the fifth single, "Island", but this track did poorly on radio as well.

By the early 1969 the group had disbanded.

In November 1969 Jay Telfer and Fergus Hambleton (who replaced Telfer in A Passing Fancy) recorded a studio album for Allied Records under the name Goody Two Shoes called "Come Together". The album was primarily cover tunes and is also noteworthy for lead guitar work by former A Passing Fancy roadie Kevan Staples - better known as half of future shock rockers Rough Trade.

Jay Telfer, who had a solo career simultaneously with A Passing Fancy (on the Sir John A. label) continued as guitarist with the Toronto stage production of "Hair" before signing to Axe Records (owned by Fergus Hambleton's brother, Greg) in 1973 for a series of singles and one album through the 1973 and 1974. He dabbled in movie script writing (1977's "Kid Vengeance" starring Jim Brown, Lee Van Cleef and Leif Garrett), and after surviving a stroke in 1984 he settled in as a script evaluator. In the early '90s he moved to Wellington, Ontario to open "Jay's Bed & Breakfast". He currently lives near Belleville, Ontario and is the editor of an antique collector's magazine called "The Wayback Times" [www.waybacktimes.com]; Hambleton would later go on to be in the band RAIN, then would launch a solo career as FERGUS for Capitol Records before becoming a member of The Ginger Group, The Basics and, finally, finding great success with Toronto reggae act The Sattalites; Fruchtman is still scene playing bass in Toronto; Seon re-located to Pickering, Ontario where he set up a dental practice; Wilson was a corporate executive head-hunter and also co-owned a nightclub in Toronto; Price became president of Tridont Ltd.

The band reunited for a one-off date in Yorkville in the late '80s.