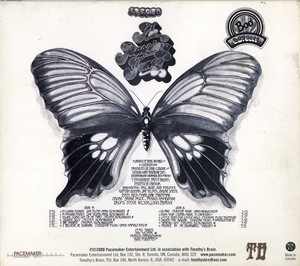 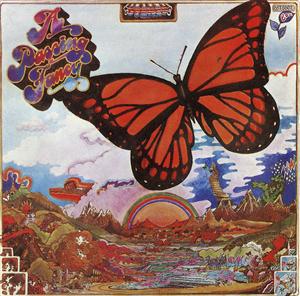 Originally issued in 1968. First reissue in 2000 in mono. Reissue of the much beloved Canadian pop-psych album by A Passing Fancy.

Great rough and loose psychy garage with the feel of the early San Francisco bands. A Passing Fancy were a popular act across Eastern Canada and soon came to the attention of record store owner Walter Honsberger and his partner Dan Bartollini after only a few shows in Toronto’s Yorkville Village. The duo took the band under their wing, building their visual image and sound to prospective record labels. Jay Telfer was the band’s songwriter (and later composed Ten Pound Note for Steel River) and struck it rich with A Passing Fancy’s 1967 debut single I’m Losing You Tonight for Columbia Records (Canada). Three more singles followed on Columbia. When it became apparent that Columbia had no intentions of following the singles with a full-length LP, the band moved over to Boo/Rebel Records where the eight previously issued sides were added to four new recordings in 1968 to flesh out their debut LP. The debut single from the album, Island, did little to light a fire under the album’s sales and by the early 70’s the group had disbanded.

A Passing Fancy was born out of Toronto's Yorkville Village scene in the mid sixties. In 1967 the band released its debut single I'm Losing Tonight, which immediately became a hit and scored high on the east coast charts. In 1968, A Passing Fancy released a self titled album on the independent Boo Records label that was well received and gathered good reviews. The Boo label, formed by two record store owners, only released the album in the Toronto area, so national fame and exposure eluded the band. The music on the album, A Passing Fancy, was British influenced pop with elements of psychedelia and an American garage sound. The band went through a couple of line up changes while recording the album but all musicians that worked on the album were credited in the album liner notes. The main songwriters in the band were Jay Telfer and brothers Fergus and Greg Hambleton. The songs were well written and the music was well played. Shortly after the release of the album, one more single followed, I Believe In Sunshine, which was also a hit. This single broke out across Canada and attracted interest south of the border as well as with some major labels but unfortunately it was too late and the band folded. Telfer and the Hambletons, in particular Fergus (as he went by for a time) went on to write more songs and record with other bands in the 70's. They also made a couple of solo albums that were well received and are still active today on the Canadian music scene. Greg Hambleton went on to form Axe Records while Fergus Hambleton continues to perform with his reggae band the Satellites. This reissue of the original Boo Records album by Pacemaker Records in association with the U.S. reissue label Timothy's Brain, is housed in a beautiful digipack case with original album artwork. Although this album contains no bonus tracks as none were available or additional liner notes, the sound quality is superb and is taken from the original master tapes. An exciting and long lost piece of the early Canadian music scene that has thankfully been restored and made available once again for all to hear and a new generation to discover.
-AllMusic.