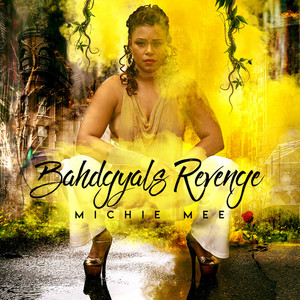 What can only be described as pure jubilation rings over the telephone line as Michie Mee, the godmother of Canadian hip-hop, tells me who she enjoys listening to right now.

Speaking to Exclaim! on the phone from Toronto, Michie Mee sings out the name: Haviah Mighty, the Toronto rapper who won the 2019 Polaris Music Prize. I can't help but get excited by the icon's exultation. "Oh my gosh," Michie Mee exhales. "I'm just glad that I can just call names and you know who I'm talking about. Just that response that we both had. It wasn't always like that. There's been times where I've had interviews, you're trying to convince them, 'Have you heard of?' And we both just jumped for joy."

Female representation in Canadian hip-hop is something Michie Mee takes great pride in. When she was up-and-coming in the 1980s, hip-hop from Canada was practically nonexistent to international ears, let alone when it was performed by women. But Michie Mee blazed both trails. In 1988, she became the very first Canadian rapper on a major U.S. label when she signed with First Priority/Atlantic Records. She found peers in American emcees like MC Lyte, Queen Latifah and Salt-N-Pepa, but Michie Mee — born Michelle McCullock in Jamaica and raised in Toronto — stood out for how she combined her Caribbean roots and Canadian perspective. With her vibrant 1991 debut, Jamaican Funk—Canadian Style, she demanded the world pay attention to Canadian hip-hop, paving the way for generations to follow in her footsteps.

Now, Michie Mee says, there's such a wide range of Canadian female emcees, each offering something individual. She names Golde London and the Sorority (the supergroup formerly comprised of Mighty, Keysha Freshh, Lex Leosis and pHoenix Pagliacci) as a couple of of her favourites. It's nice to see, Michie Mee adds, because such nuance has typically been reserved for male rappers. Still, some of the barriers she encountered in her early career continue to face young Canadian female rappers today, particularly when it comes to breaking through to the U.S.

"I used to always say, no one wants to hear what we have to say. For me, here I am, this Jamaican, underground, grew up Jane and Finch — how do I get talking [to] the A&R? Where do I get the growth, in terms of [being] a female rapper in the business of music?" Michie Mee says. "That hurdle's still there. I think one of the big goals should be for Canadian [female hip-hop artists] to make it in the U.S. That's still something that's an obstacle, because there's a rapper in every corner, and everyone's doing it, and knows how to do it, so you have to kind of gain your respect, and that goes to show what I was fighting back then — if it was so easy, I'd have been able to do it."

Even as many Canadian pop and rock artists found international acclaim, Canadian hip-hop remained largely unacknowledged prior to Drake's global superstardom in the past decade. Ultimately, Michie Mee says, mainstream success in the U.S. comes down to sales numbers and money, and, down south, there's simply more infrastructure in place to support artistic development in hip-hop. "There's just way more radio, way more space that's really cultivated that you can actually grow and sell your independent material, not only online: you can go to this region, this state, and just do certain things, and your records are selling in a system."

Perhaps worse is how the Canadian music industry was just as indifferent to its own hip-hop community. In response to that dismissal, Kardinal Offishall, Rascalz, Checkmate, Choclair and Thrust collaborated on the crucially important 1998 single, "Northern Touch." Over the past 20-odd years since, Toronto has exploded as a global music hub; along with Drake, R&B artists like the Weeknd and Jessie Reyez have helped attract more wide-reaching attention to the city and its abundant musical landscape.

"We've had more access, probably, to grants," Michie Mee says of Toronto's boom. Grant allocations across provinces has also highlighted a deep and diverse pool of talent in Canadian hip-hop. She finds the growth satisfying. "Before, we used to be pigeonholed as one kind [of music]: no, there's big differences. There's so much now."

But there's something still starkly missing in Canadian rap: stories told by mature female voices. In rock music, for example, veteran men are lauded. Artists like Neil Young are still given arena stages to stand on. "That leaves a niche wide open for me," Michie Mee asserts. At 50, she still has so much to prove — and stories to tell. "You want to talk about menopause? Whatever! Pre-menopause?" She laughs. "Having kids, fibroids, whatever you want to talk about. I mean, there's so much that you could make fun of, doesn't have to be straight."

And this gap isn't just in Canada. It's worldwide. "I'm hoping other rappers and artists, like my sister MC Lyte, and Queen Latifah, they all come back on the scene — the Roxanne Shantés — and drop an EP. Drop a single. You know, ladies, like, we're still here. We're so classic, we gotta be shelved? No: we want to be some classic, still, on the road. Like other genres and all the men."

Michie Mee's excellent new album, Bahdgyal's Revenge, came out last November. She has released handfuls of singles over the years, but this is her first full-length since 2000's The First Cut Is the Deepest, which included the Juno-nominated hit "Don't Wanna Be Your Slave." "To stay relevant now and to have the nerve to drop an album now, I really do give myself credit, because it's hard to do," Michie Mee says.

She wrote Bahdgyal's Revenge as she travelled to and from Jamaica, finding inspiration in the sounds of airports, the atmosphere, the bars, the streets. She veered away from drawing on any kind of trending production style, instead pulling from what she already knew. And while the album retains her distinguishing blend of reggae, dancehall and rock, it still sounds bitingly fresh as she raps about respect on "Bahdgyal Bubble" and resilience on "Times Change."

The album also prominently features local talent like Xentury and Tonya P, who flew out to Jamaica to collaborate with Michie Mee. "I thought it was my way of reflecting my A&R abilities in the underground scene, based off of those two always showing up for my birthday party [Scorpio Bash], every year, just to perform," she says. "So, this was my way of giving thank you, a way of giving back to whatever they're doing."

Michie Mee's voice wells up with pride again. She is, more than anything, a champion of Canada's hip-hop scene. She keeps tabs on up-and-comers through social media ("My son, his friends, my peers' kids, my nieces, my nephew, they put me onto everybody") and, before the pandemic, she frequented Honey Jam, the emerging female artist showcase, and Adelaide Hall.

"I'm a proud Canadian artist," she says. "And when I see other Canadian artists, just people holding that, that's what I like. I like when they're up there. When you have an impact as a Canadian, it's a big deal."

It's like she rhymes on the track "Made It," from Bahdgyal's Revenge: "And every opportunity I'm back in my community, spreading love and unity sound."
-Yasmine Shemesh, exclaim.ca, May 12, 2021