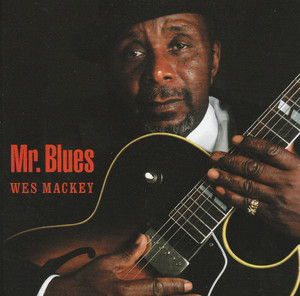 See, he has no aspiration to become the biggest or most renowned musician. He cares little for fame or glory. He's played alongside the greats — John Lee Hooker, Muddy Waters, Jimmy Reed to name a few — but he says that the highlight of his 50-year career has been what he's achieved within the past year.

You see he's brought the blues to five star hotels in cities where the blues is rarely heard — resort towns in Malaysia, in Russia, in Ireland.

"For me, it's a big accomplishment," Mackey says. "Where I came from, in the Deep South — picking cotton on the plantation, you know — to progress from that era and to put that (the blues) into five star hotels, to me, was a dream come true."

At 69 years old, Mackey has finally found his niche. He's now touring the world year round He's played dozens of festivals in Europe, where he's especially popular in blues circles.

He's now working on his third album, inspired by his life as a travelling blues man with each song written about a different town.

But Mackey's story is not typical of an American blues musician, though it certainly starts off the same. You see, Wes Mackey was born the son of a Baptist preacher in 1942, on a cotton plantation in South Carolina. These were the days when African Americans were still called Negros, when they had separate bathrooms and water fountains.

Mackey is uncharacteristically sanguine for a man who sings the blues night after night, but it was only natural for a young man with an artistic proclivity to gravitate toward the blues. It was all around him.

"It was a way of life," he says. "Everybody played the blues. Everybody listened to the blues."

He moved to Georgia in his late teens, playing in ensembles that would back up the Waters's and the Reeds when they'd pass through town.

"I just happened to be in the right place at the right time and it helped shape my life. Playing with those guys, I would briefly talk with them about life. It helped set my path for me," he says.

But then he deviated. You see, he had a taste of Canadiana when he played Expo '67 in Montreal. He was impressed with the freedom of the people there, and the way he, as a Black man, was treated. There was no segregation. There was very little hate even. He fell in love immediately and by 1971 he was a landed immigrant.

"When I came to Canada, I took a different road, which I'm very happy for because I was able to put the blues in different places that most blues players don't play in," he says. "That makes me feel like I've accomplished something. Going and playing in Chicago and all the places like that, I did those things for many years. They're different cities but it's all the same thing."

He became a road warrior, a veteran of the blues landscape in eastern Canada. He toured frequently, playing blues clubs across the continent — dusty, dark, underground. You name it, he played it. By the 1980s, he was burnt out. He was drinking, you see, perhaps a bit too much. Something had to give.

"I had no problem fixing my life. It was just some things from my past came to a head and I had to get away. I had to back away from the trees to look at the forest," he says.

He left music for six years before finally playing again in a small club in Nanaimo. He moved over to Vancouver, where he's been a regular on the blues circuit, frequenting the Yale Hotel. But he had a dream, you see, to rise on up out of the dingy clubs and move into the five star hotels and plush bars. To capture an audience far different from those in the Deep South — an audience that might never think about the blues but that was moved all the same.

"The blues to me is life," he says. "I tell stories about the way I live my life and I use the blues to lift up my spirit and lift up people's spirits. I tell stories that (people) can relate to. It's about telling a story and I like to keep my stories very simple," he says.

He plays the way the old guys used to play. His entire career has been centered on spreading the truest, purist origins of the era. And he'll play all alone — just a man, a humble man, with his guitar, his voice and all that pain, bleeding through the mic onto you.
-Stephen Smysnuik, piquenewsmagazine, Dec 21, 2011