With more than 50 years in music he went from working the dusty honky tonks of Georgia to performing in five star venues, festival and concert stages around the world including places like Iceland, Russia, Malaysia, Hong Kong and many others.

For years he toured as a side man and the road finally took him to Canada. It was a long and complicated journey but eventually he took front and center.

As a soloist or bandmaster his dynamic stage presence and uplifting performances finally caught the attention of European promoters and made him a favorite in Europe where he has toured and performed countless times.

Wes Mackey learned to play the guitar from the seasoned old blues players of the South where he was born and raised. At the urging of his father he eventually left “Big Estate” in rural South Carolina and moved to Augusta Georgia where his career really began.

His first gig paid 50 cents and a chicken sandwich but soon he found himself working in bands that would back up touring artists including Muddy Waters, John Lee Hooker, Jimmy Reed, Stevie Wonder and many others.

In 2003 he put out his aptly titled album Second Chance, and followed it up with the equally excellent Mr. Blues in 2006. Wes released two more albums, Beyond Words in 2009 and his latest Life is a Journey has also received outstanding reviews including a 4 star rating from iconic French magazine Soul Bag and “Highly recommended” says Blues Magazine.. a very nice blue album. Songs with personal lyrics, about Mackey’s look at the past and the future.” Mackey latest release ( 2017) Back to The Shack Retro- Collection recently received an excellent review in the 2017 December/ January edition Living Blues Magazine.

Life is a Journey

Something b/w Stop Carrying on

Life is a Journey

Back To The Shack Retro Collection 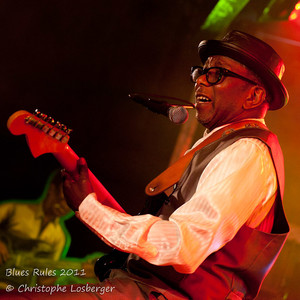