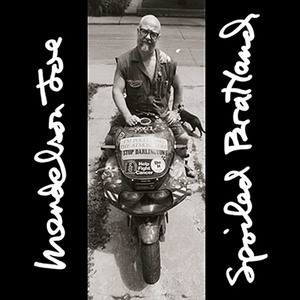 Eclectic, multi-media artist Mendelson Joe follows up his historic LIVE AT SIXTY-FIVE solo CD with his visionary, and most accessible toe-tapper Spoiled Bratland. Spoiled Bratland is the work of a visionary. It’s a landmark of love and passion for truth: many truths. Timing is everything. Behold the renaissance of Canada’s resident existentialist and self-taught minstrel.

As a Canadian, do you want Omar Khadr repatriated?

He confessed to doing so.

"That doesn't mean he did it! His lawyer told him to confess if he ever wanted to get out of jail. C'mon! He's been raised to think the infidel is the devil. He's a kid. Kids will do crazy things. That's why they make child soldiers out of kids. They become the greatest killers."

Is Omar Khadr a "real" Canadian, or one in name only?

"He's a real Canadian. If you're born in Canada, you're a Canadian, end of story."

Simply geography? Are his values and outlook those of a Canadian?

"Why not? People have their own views. Some may conflict with yours and mine. They're still Canadians."

Can he be rehabilitated?

"Of course. I don't think he's the only kid in the world who was raised by nutty parents. He probably will do well with some shrinkage. Just like most humans."

"I didn't say that. Yes, unless he's a psychopath, there's every reason to think he might be rehabilitated to the state where he's a functional person. He may be a killer, but there are killers walking around on the streets today. They did their time. This guy's already done eight years, and he's a child. That's more than a third of his life. Paul Bernardo's wife, Karla Homolka, she was involved in the raping and killing of two women and the raping and [death]of her sister and she got out of jail. And she was an adult when she did those things."

Are you ashamed the government didn't go to bat for him as a Canadian citizen?

"Yes. The government of Canada should behave as if he were one of their kids. And they didn't."

Omar Khadr was sentenced to 40 years for crimes to which he confessed. A plea arrangement could see him repatriated in a year and free shortly thereafter. Is this justice? Is this fair?

"There is no 'fair.' Let's say you had a 15-year-old child and you taught that child that the worst thing that could happen to you is Halloween; on Halloween, people will come out and, if you allow them to come to your door, you must kill them. That's what happened to this kid. It sounds crazy, what I just said, but it amounts to the same thing. Religion is all mental illness to me. No God gang is any different to the other.

Would you invite him to lunch?

Would you have him sit for a portrait?

I'm interested in women because I think women are the only hope. When I paint a male, it's usually because I respect them. I don't have Tony Clement in my house. But I did a painting of him. I don't want Brian Mulroney in my house, but I painted him probably 30 times. I want people I respect in my house.
-Anthony Jenkins, Nov 19, 2010, The Globe And Mail