Ginn, Judy (Walchuk) - You Look But Do You Really See/ You Think Of Me As a Sister b/w The Song Keeps Repeating 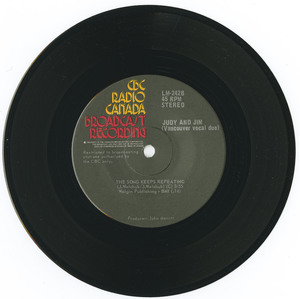 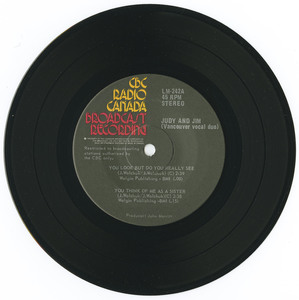 Turn back the time to the 1960’s when Vancouver had a vibrant supper club and night club scene. “The Cave” and Isy’s Supper Club hosted numerous big name acts from Las Vegas such as Louis Armstrong, Duke Ellington, Chubby Checker, Della Reese, Bobby Darin, Kenny Rogers, Little Richard and the list goes on and on. The site for the induction was carefully chosen for a special reason as the prestigious Shangri-La hotel Vancouver sits on the original property where Isy’s Supper Club once shone like a beacon of night club entertainment. Judy Ginn Walchuk and Jim Walchuk performed at Isy’s Supper Club many times over the years.

The induction was conducted by BC Entertainment Hall of Fame President, Rob Haynes, Past President Elizabeth Ball and Vice President Chris Davies. The induction followed with a “Mini Concert” given by the inductees.

Judy Ginn, as a young girl began her musical career performing on radio, concert stages and television. In the 1960’s she had her first booking at Isy’s Supper Club and that opened the stage door to supper clubs across Canada and the USA. She recorded for RCA as well. Her brother Jim, in the meantime was studying bass and guitar and making a name for himself on the Canadian Jazz scene. Both Judy and Jim became an opening act at the Cave Supper Club for many “A” list celebrities. Soon, they were flown to London and performed at the famous Playboy Club, “Talk of the Town, the Hippodrome and they were discovered by David Frost who invited them to sing at a birthday party for Sir Noel Coward.

In Los Angeles they worked the Playboy Club and performed 5 times on the Merv Griffith shows with Joan Baez, Buffy St. Marie and Peter and Mary of Peter, Paul and Mary.

They joined the Don Ho Show in Hawaii and later toured the show to the Flamingo Hotel in Las Vegas. Judy and Jim returned to Vancouver in 1976 and starred in their own nationally broadcast CBC Television musical variety series, “The Judy and Jim Show”. Following its second season, they lived in Los Angeles to write and produce for many well known artists. In the 90’s they returned to Vancouver and still remain busy writing jingles, specialty material and produce for artists in Canada and the UK. Both Judy and Jim still perform live and record with their talented sister Marlee Walchuk.

Judy and Jim have always been songwriters first and remained true to their art.