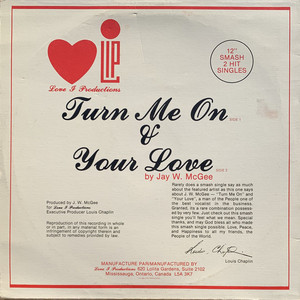 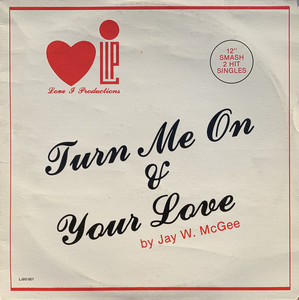 "Turn Me On“ is an unusual production for its time, grooving along unbelievably deep in a spartanic arrangement, and fuelled by vocals which are not too far away from Sylvester’s iconic style of mixing soul, disco, funk and jazz.

Jay W. McGee has a strong opinion about disco music: "When disco came out, it had its own way of reaching people’s hearts too. Being in a club, you know, it’s escapism, like with soul music. Soul is addressing everyday life problems, disco is about how to forget and enjoy yourself. They each have their own unique place. I saw people railing on doing disco because they didn’t understand the seriousness of it,“ Jay W. McGee explains about „Turn Me On“ when he officially commissioned this re-release: „The discrimination of disco was in reality a discrimination against black music.“

„Your Love, the flipside of this 12inch single, is an exciting ballad on the B-side and a surprise in itself. Both tracks feature a great combination of talents. Wayne Jackson, the trumpet player on "Turn Me On“, played on Rick James’ album ”Bustin’ Out On L Seven”, in the late Seventies. Glenn Johanson was the engineer on "Your Love“. He became Eddy Grant’s house engineer at his studio in Barbados right after he mixed this tune. But there is also a little drama in the story. When Jay W. McGee returned to the studio where he recorded, "Turn Me On" he found out that the original version of "Turn Me On“ was erased by another technician: "Everybody said it could have been a hit, and maybe the guy did it on purpose.“ Nevertheless he recorded the song again with a now different arrangement and instrumentation. Maybe that is the reason why the production is so unique and also so different to "Your Love“".

Jay W. McGee could have been a solo artist on Philadelphia International Records, back in 1969, when he met Leon Huff of Gamble & Huff, in Philly for an audition, just before they recorded "Me And Mrs. Jones“, "Bad Luck“ and "Backstabbers“ with Billy Paul, Harold Melvin and The O’Jays. They offered him a contract, but he refused, because he came with his whole group from Flint, Michigan and they wanted to be signed collectively.

Jay W. McGee kept just one of the original 12inches in his home: "Both songs were a profession of love to my wife. We are now married for 34 years.“ Now if this ain’t love, we don’t know....”