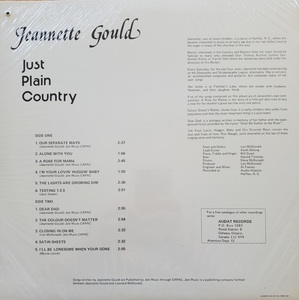 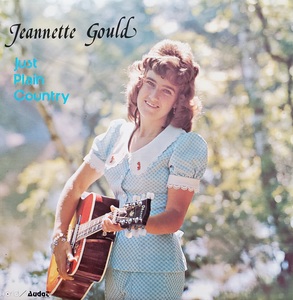 Welcome to MOCM!
LINER NOTES:
Jeannette, one of seven children, is a native of Halifax, Nova Scotia, where she became interested in music at an early age due to her late father playing the organ in many of the churches in the area.

Mainly interested in the Counrry and Western field, her name should be familiar to many who attended Don Thomas Auction Centre, Centennial Arena, or Farrell Hall where the Jamborees were held under the direction of Vic Mullen.

Every Saturday, for the past four years, Jeannette has been entertaining at the Stewiacke and Shubernacadie Legion, alternately. She is not only an accomplished songstress and guitarist, but composes many of her own songs.

Five of the songs contained on this album are of Jeannette's own composition:

A Rose for Mama: is the story of a little girl who tries to buy a rose for her mother's grave but only has a penny.
Colour Doesn't Matter: shows how it is really children who suffer from prejudices and that the most important thing is a pure heart.
Dear Dad: is a dialogue written in memory of her father with the background music provided by the hymn "Shall We Gather at the River".
I'm Your Lovin', Huggin', Baby and Our Separate Ways: convey the joys and trials of love. Ron Naugle joins Jeannette on the last of these, singing verse and harmony.

At the time of this recording, Jeannette Smith was married to Newman Gould.