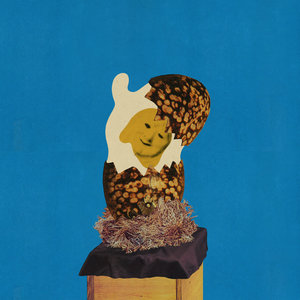 Montreal’s Corridor release their Sub Pop debut Junior. The first Francophone signing to the infamous label (Nirvana, Mudhoney, Soundgarden)- this is a wholesome dazzle of oooooh that will rest easy alongside a good mug of something warm and a reclining leather chair angled towards the sun.

The uncertainty of the language is hell cool and a concept that is equally familiar and un-so all in the same breath of temptation. Like a DIY birdhouse that, as a base, can multifacetedly be used for worldly inspiration, a place of collective affection and of which one can return to with assurance of captured comfort and sheer amenity- this is a lived-in nest of timeless sanctuary in which, having Dominic Berthiaume on both bass and vocals makes total and utter smooth rolling sense.

Junior is everything you would want from a youthful associated title piece. Easy-breezy jangle psych hop-scotch in a playground of gathered guitar as the group squeeze real charm into their allocated thirty-nine minutes playtime before an afternoon of endless jamming.

A satisfyingly complete round up of 10 tracks come together to create a force to be enjoyed with. As both the beating heart and the beating rhythm belonging to a French functioning body of craftmanship, numbers such as Pow and Bang are perhaps not as raucous as they inspire to be but undoubtedly sparkle like the fizziest of articulate cordials. Are you feeling playful? Why not add a riffy spoonful of Topographe - a call and answer pallet cleanser to carry and refresh you through the winter months.

Whether you can sing along or otherwise, allow yourself the time to indulge in Corridor.