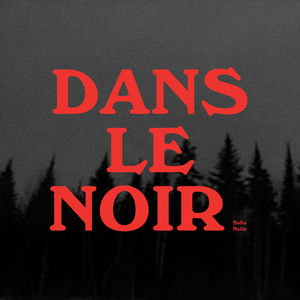 Safia Nolin is a singer from Quebec City. (Jean-François Sauvé)

It was a year after Nolin's debut album of "downer folk," Limoilou, was released, and that night she would be named discovery of the year at the gala. Dressed in jeans, a T-shirt with late Quebec rocker Gerry Boulet's face on it and a plaid shirt overtop, Nolin would also receive a blast of online hate for not dressing up for the big night (and for swearing in her acceptance speech). But what she said after winning her award would serve as a motto for what followed:

"Les filles: vous pouvez faire tout ce que vous voulez. Vous pouvez faire des jobs de gars, on s'en criss!" (Girls, you can do anything you want. You can do men's jobs, we don't give a damn!)

"[I'm] not like the typical singer with a long dress and a guitar; a folk singer in the woods," Nolin, who is from Quebec City but has lived in Montreal for four years, says over tea in the neighbourhood of Vieux-Rosemont. She explains that people either love her or hate her, and that the last three years since her debut album have been a "crash course" — in dealing with sexist trolls online, but, more importantly, finding her way as an artist.

"I feel like I'm a different person," says Nolin. And on Dans le noir, her newly released album, Nolin has written 13 raw songs about failed relationships and self-image, her beautiful voice breaking your heart with each verse she finishes.

"I feel like I understand more what's happening in my head and in my life, so I feel like it's a more sharp and clear view — but it's darker, also," Nolin says of the album, laughing at the prospect of her already dark music being darker.

But while Limoilou's deeply personal songs about bullying and loneliness poured out of Nolin no matter where she was writing, these new songs were less forthcoming.

"I was uninspired, I felt like I would never be able to write music again," admits Nolin, of the time between her first and second album.

In the end, she needed to sit herself down in a new location to write: the first batch of five songs was written at an artist's residency in Banff, followed by a second batch of five written at a cottage in Quebec over two weeks. Later recorded and mixed in eight days at WILD Studio, Dans le noir was co-produced by Joseph Marchand, Philippe Brault and Nolin (her first time at that helm), while Zeus's Carlin Nicholson — the only anglophone among the collaborators — worked on it as sound engineer.

Parts of the lo-fi sound on Dans le noir come from the first time Nolin recorded the songs on cassette. There are about six minutes of those demos spliced into the album (you can hear it on "Le néant," "Encore" and "La neige"). The in-the-woods feel also bleeds through on a song like "1998," which has a crackling fire in the background.

While every song rings personal, the track "Sans titre" (Untitled), hits hardest. It starts with a montage of voices taken from a VHS from Nolin's childhood, making it sound like Nolin is in conversation with her father — who left 13 years ago, and whom Nolin hasn't spoken to since.

It's untitled because "it's so hard to find a title for a song about your dad leaving. And then he's a person I don't know anymore."

"I write songs to feel better about stuff and understand what's happening but this one is not doing anything at all right now," says Nolin. "Like, I don't feel any better about that, or I don't feel like, 'Oh it's done, I'm done, I forgave — like, no. I just feel like now it's out and everybody knows."

Another standout track is "Lesbian Break-up Song," a duet with Ariel Engle (a.k.a. La Force), and it's the only bilingual song on the album, with Engle and Nolin trading English and French verses, respectively, and ending in fitting harmony.

"I feel like [the francophone and anglophone music communities] could probably just be closer, and that was kind of a way to make a bridge," says Nolin, pausing. "But whatever [laughs]. Super cheesy [laughs]."

An avid commenter on her own Facebook page (often trying to make sure fans are managing well with selling tickets to each other for sold-out shows) Nolin gets a lot of love — but still has to deal with what feels like a disproportionate amount of the hate.

"Marc asked my permission before publishing his article and I agreed that he should do it," Nolin later wrote to CBC Music via email. "I think it's important and necessary that an article with these sorts of comments be written by a man for the whole world to see.

"Simply because our society still thinks, generally speaking, that women should look a certain way and act a certain way to please men. Having a man write that 'I think I'm getting all these messages because you're a woman' really hits home."

The motto still stands: Girls, you can do anything you want. You can do men's jobs, we don't give a damn!
-Holly Gordon, CBC Music