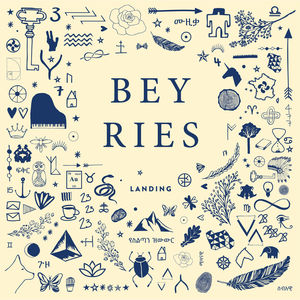 "I'm forced to let go," Beyries sings on "Son," but there's no trace of defeat in her voice. Instead, the dogged toughness in the Montreal songstress's tone makes the song a highlight on Landing, an album at times sorrowful and completely bleak.

Her rugged delivery on the verses of "Son," juxtaposed with celestial cooing on the bridge, is followed by the more straightforwardly plaintive, piano-and-vocals-only "Soldier." It's simple yet gorgeous, a real heartstring-tugger if ever there was, especially when the string section climactically kicks in.

A nice counterpoint: Beyries' choice to strategically punctuate the chorus of the ballad "Wondering" with rainfall-like electronic drumbeats. And then there's her singing in French on "J'aurai cent ans," a duet with Louis-Jean Cormier that's richly romantic and deeply moving, even for those of us can't comprehend a word.

In short: this Montreal chanteuse will enchant you with this downtempo yet dynamic batch of songs. (Bonsound)
-Kyle Mullin, Exclaim

With her debut album Landing, Beyries became a sensation in her home province of Quebec simply by being herself. Born and raised in the Montreal neighbourhood of Outremont, Beyries started writing songs at her grandmother’s piano at a young age, but kept those songs to herself. She worked at restaurants and offices, living an entire lifetime of ups and downs before committing to music. Inspired by artists who create intimate moments with their music, Beyries told simple, relatable stories on Landing through lyrics and melodies, treating songwriting as a craft. Audiences have responded, with 11.5K in album sales and 15 million streams across all platforms, and the deeply personal encounters on her musical journey have inspired and informed her future releases.