Sainte-Marie, Buffy - Power in the Blood 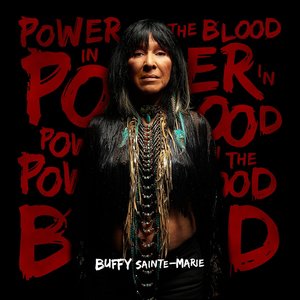 Now 74 years old, Buffy Sainte-Marie hasn't released a new album since 2008's Running for the Drum, but that will change this spring with the arrival of Power in the Blood. This album will drop on May 12 through True North Records.

Most of the songs here are brand new, but opening cut "It's My Way" is a re-recording of the title track from her 1964 debut album. "Power in the Blood" is a collaboration with electronic group Alabama 3.

According to a press release, "Power in the Blood is a reminder that, five decades on, Sainte-Marie is a voice as vital and significant as ever. Like so much of Sainte-Marie's work, it's universal."

The songs touch on subjects like "the sanctity of life, the splendour of Mother Nature and scathing political and social commentary.