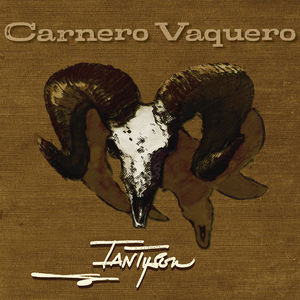 Ian Tyson is 81 now. And he’s still going strong. Still touring. Still running the Tyson ranch south of Calgary. Still watching the West as he’s seen it change — and not always for the better. Still writing about love, horses, and the country and sky he loves. And he’s still facing the future with a mixture of optimism and resignation.

You can hear all of that in Carnero Vaquero, his 13th album for Edmonton-based roots music label Stony Plain. These are ten songs that ring as true as the western sky and the foothills of the Rockies.

The title? “Carnero” is the Spanish word for ram, and “Vaquero” is Spanish for cowboy, and, indeed, the cowboy tradition, particularly in the south-western United States.
Recorded in the Stone House, just down the gravel road from his ranch house, there’s an intimacy and warmth that draws you into his life… It’s the place where Tyson writes his songs, practices guitar, and reads his library of western histories and the early books of Will James.

I remember back on Dead Man’s Creek sixty years ago
I hired up breaking broncs which I’d never done before
Just a city kid and I asked myself
Now what would Will James do?
You know it was the damndest thing
‘Cause it kind of got me through
Your eighties, Tyson tells people, is not a time for sissies. Age is one thing, but the changing West is another, and since Tyson moved to Alberta forty years ago he’s seen way more changes than he’s comfortable with. But the sky and the mountains keep him there, and his alternating regrets and optimism spark his songwriting.
The old songs are forgotten
Gone with the ravens on the wing
And love no longer matters and the wind no long sings
The old man sold his horses
The children sold the ranch.
The rain will come again some day
The stars keep on shining
The poets will return one day
Magic melodies and rhyme
And God is up there somewhere looking down on everything
And love will always matter and the wolves will always sing.

Carnero Vaquero is a special Ian Tyson record. There are half a dozen new songs — as good and better as dozens crafted in the Stone House. There are also two co-writes with a younger, alternative songwriter out of Calgary, Kris Demeanor, and another collaboration with Tom Russell (they co-wrote “Navajo Rug,” one of Tyson’s biggest hits). The opening song, “Doney Gal,” is a traditional song that probably goes back to the earliest days of discovering the West, and he reprises “Darcy Farrow” from one of his earliest Ian & Sylvia records.

Tyson’s smooth relaxed voice has been part of the musical landscape since the early 60s, when — with his then-wife Sylvia Tyson — he conquered the folk boom of the day. Hits kept coming — “Four Strong Winds,” “Someday Soon,” “Summer Wages” and more. A move to Alberta, a hiatus from the music business, and a reluctant return that earned his first platinum record for Cowboyography led to a storied career as North America’s preeminent western singer.

Tyson doesn’t like looking backwards at five decades of a career that’s earned him countless awards, the Order of Canada, and a devoted following. He rarely talks about what he calls “the Ian and Sylvia days,” pointing to a four-decade “solo” career.

Now recovered from a torn and damaged voice that drastically changed his vocal sound in 2008, he’s singing with the strength and range of his earlier years.

He has concerts booked well into next year, and he continues to supervise his working ranch; this is a man for whom “the cowboy life” is an ever-present reality.

And Ian Tyson stares at the future with clear eyes and a weather-worn face. Bring it on, he seems to say.

Tonight I hear the call of Cottonwood Canyon
Listen, you can hear it on the wind
There ain’t no cell phone towers in Cottonwood Canyon
Maybe some old coyote will give you a call
Can I find my way back to Cottonwood Canyon?
Have the drillers come? Have I waited too long?
Cottonwood trees they cry to me
Her songs of long ago
And I slept in the sand far below
Down where the clear waters flow