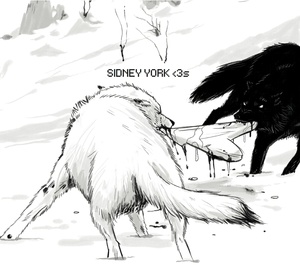 Begun as a long-distance musical collaboration between opera singer Brandi Sidoryk and bassoonist Krista Wodelet, Sidney York is one of the sharpest, sweetest, most surprising musical duos around.

Named Best Untapped Newcomer at the Calgary Folk Fest, Sidney York has also performed at the 2010 Vancouver Olympics, SXSW, Canadian Music Fest, NXNE, BIGSOUND (Australia), Music Matters (Singapore), and Reeperbahn (Germany). Their 2011 album Apocalyptic Radio Cynic was called “vivacious, fresh, fun and gorgeous… a burst of fresh air” (Tamara Stanners, The Peak 102.7FM) and celebrated for bringing “sense of humility, a touch of class and most of all, fun” (Andrew Elliot, The Café Live 88.5FM) to the nouveau-pop genre.

Sidney York has recently shared the stage with notable artists Rich Aucoin and Carly Rae Jepsen, and will be featured in the forthcoming documentary Tracks on Tracks, which showcases ten Canadian acts on a cross-country musical adventure aboard a VIA Rail train.

Their brand-new album <3s (Hearts) infuses their trademark blend of layered vocals and eclectic influences in a set of tracks with “an undeniable edge and depth” (Kirk Hamilton, 3AM Revelations). <3s, an album in five volumes, is available in Canada and the US through a unique subscription model. The fifth and final volume of the album releases February 10, 2015, alongside the all-inclusive full-length.

From the opera stage and the orchestra pit to the indie music scene, Sidney York is reinventing the meaning of the term “band geek”, one stage at a time.